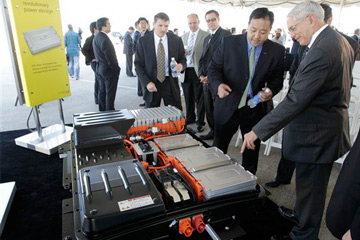 Lithium-ion (Li-ion) can store more power into smaller sized battery packs and automotive companies are starting to use them as a more advanced electrical storage system for their hybrids.
AP Photo/Mark Humphrey

Advanced hybrid systems function similar to many standard hybrid vehicles, meaning that they still use a small internal combustion engine, an electric motor and in most cases a set of batteries. But advanced hybrid systems go one step further and incorporate newer technologies into the vehicles.

One example of this would be the use of lithium-ion (Li-ion) batteries as opposed to nickel-metal-hydride batteries (NiMH). Lithium-ion can store more power into smaller sized battery packs and automotive companies are starting to use them as a more advanced electrical storage system for their hybrids. Li-ion currently cost more to produce, but they have more benefits that NiMH batteries do, In fact, many companies have invested a lot of money to develop sophisticated Li-ion battery technology. So, as the price of the technology has started to decrease, manufacturers look to Li-on as the dominant electrical storage for hybrids. Even though Li-ion batteries are becoming the battery storage of choice, some advanced hybrids don't use battery technology at all. Instead, they use a flywheel to store electricity for use later on. (We'll get into this topic a little later on in the article.)

Another major technology difference between traditional hybrids and advanced hybrid systems is the amount of electricity used for the vehicle's power. Yes, all hybrids use some sort of electric motor to assist the combustion engine, but advanced hybrids use the electric motor in ways that provide an alternative to the gasoline engine while commuting, rather than just assistance to the engine. In some advanced hybrids, like the Porsche 911 GT3 R, there are two electrical motors that power the car instead just one [source: Abuelsamid].

In addition to lithium-ion batteries and the use of more electric motors, advanced hybrid systems may also include plug-in technology for battery recharging. Not all advanced hybrids are plug-ins, but some, like the Toyota Prius plug-in, integrate the technology into the vehicle in order to provide an alternative means of recharging the batteries as opposed to only recharging them through driving and braking.

On the next page, we'll take a look at some examples of how these technologies are being applied.