Browse the article How the Acabion GTBO Works 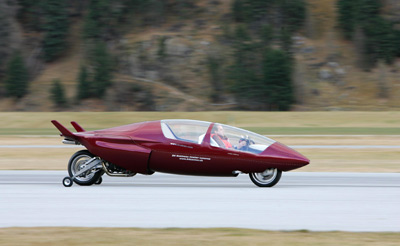 ­Imagine driving from Atlanta, Ga. to New York City in just over two and a half hours. Sound impossible? You're probably thinking you can't even fly between the two cities in under three hours. With all the airport tr­ansfers and walking through baggage claim and dealing with security, you'd be lucky to make it in five hours. But what if you really could make the drive in that time? Let's crunch some numbers.

That's not what the designers of the Acabion GTBO think. Short for Grande Tourismo Bionic Optimised and named after the Acadia National Park in Maine, the Acabion GTBO looks more like one of the cars found on Space Mountain at Disney's Magic Kingdom than a road car. But unlike the iconic rollercoaster, the GTBO is a luxurious, efficient and very fast automobile.

At quick glance, the Acabion's low-slung design looks like the fuselage of a jet fighter with motorcycle wheels sticking out of both ends. But unlike a motorcycle, the GTBO drives like a car. The driver sits upright and grips a steering wheel, just as someone would in a typical passenger car; however, instead of cruising down Interstate 95 toward Manhattan at 70 mph (112.7 km/h), the Acabion can do it at 342 mph (550.4 km/h). Not only that, the GTBO gets better gas mileage that a Toyota Prius.

Since 1985, one man's idea has evolved into a futuristic vehicle that may revolutionize road travel. In this article, we'll look at the design concepts and break down the mechanics of the GTBO to see whether this street missile is capable of living up to such lofty claims.

Speed on over to the next page to find out why the Acabion is actually very similar to a ground-bound aircraft. 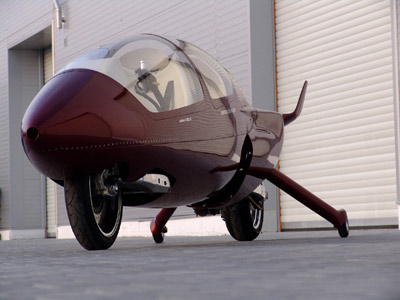 © Acabion™
Acabion's canopy is made from lightweight, yet extremely strong, carbon Kevlar® composites.

Acabion's chief designer, Dr. Peter Maskus, is a former engineer for BMW, Porsche and Mercedes Benz. Having spent more than 20 years in the automotive industry, designing high-end sports cars, Dr. Maskus decided he wanted to build his own car.

The Acabion GTBO is what's known as an enclosed motorcycle or road streamliner. Streamliners are hand-built two-wheeled dragsters that resemble land rockets and are commonly built for land speed racing. In this case, the GTBO is a street version (but not yet street legal). According to Dr. Maskus, the initial concept for the Acabion GTBO came out of his affinity for motorcycles and flying. Looking at the vehicle, it's easy to identify the two concepts.

As a general rule, engineers who build race cars and purpose-built vehicles for speed consider weight the enemy. Motorcycles already have this advantage -- they're small, lightweight and have a high power-to-weight ratio. As a result, motorcycles can reach high speeds and typically out-accelerate even the most exotic sports cars. Motorcycles also have less rolling resistance or friction to overcome since they only have two wheels in contact with the road versus four on a car.

The other conceptual design at work is aeronautics. The cockpit looks similar to a glider and even has wings and tips at the rear. The shape resembles a bullet and the wings give the GTBO sufficient downforce for stability.

Unlike a typical streamliner, the GTBO is built for more than just speed. The GTBO's interior is made from fine Swiss leather, and the sound system contains 26 handmade lightweight neodymium speakers that play in Dolby 5.1 sound. The inside of the cockpit is symmetrical, allowing for dynamic acoustics.

A driver and one passenger sit one in front of the other inside a cockpit designed to withstand severe impacts much like the monocoque of a Formula 1 car. To achieve the necessary strength and safety standards, the canopy is made from carbon Kevlar® composites and is extremely lightweight. The engine is mounted behind the passenger compartment, yet concealed underneath the canopy, and the entire surrounding frame is made from high density aluminum. To make servicing the engine easier, three large bolts are all that connect the engine to the aluminum frame. A skilled mechanic can remove the engine of the GTBO in a very short time.

The fastest production cars and motorcycles in the world don't even come close to approaching the speeds of the Acabion, and the most fuel-efficient hybrids are gas guzzlers in comparison; however, there are similar vehicles. On the next page you'll meet the Acabion's distant cousin and we'll attempt to determine if the claimed speeds are fact or fiction. 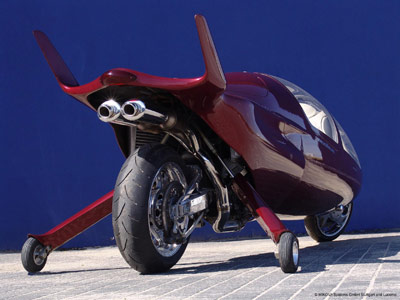 © Acabion™
The Acabion GTBO has a good balance of weight, aerodynamics and power -- a recipe for speed.

As we've seen so far, the Acabion GTBO is more motorcycle than car. It stands to reason then that the Acabion would need a pretty stout motorcycle engine, right? Well that's exactly what's buried deep inside the inner workings of the GTBO's canopy and chassis. To build a super motorbike with ideas of cruising at speeds in excess of 300 mph (482.8 km/h), Dr. Maskus looked no further than the Holy Grail of motorcycles, the Suzuki Hayabusa, for the power plant. At 185 bhp, the stock Hayabusa motor is plenty for Suzuki to propel the superbike to speeds approaching 200 mph (321.9 km/h). But the Acabion pushes the limits even further and the street fighter boasts a heavily modified 1300 c.c. (1.3-liter) turbo-charged Hayabusa engine that puts out 354 bhp. Acabion claims the engine can be tuned to put out more than 700 bhp.

To build a car for speed, engineers and designers look at the balance of weight, aerodynamics and power. The specifications suggest that these three elements work together in perfect harmony and may allow the Acabion to reach such high speeds. With a nearly nonexistent drag coefficient of .14, and weighing only 661.5 lbs. (300 kg), the Acabion blends amazing aerodynamics and feather-like weight. Combine these engineering feats with a 354 bhp engine and you get a recipe for speed.

Aerodynamics certainly aid in fuel efficiency too as the miniscule drag coefficient means the GTBO can cruise at speed while using hardly any throttle input. The seating position also plays a part as the same vehicle in a side-by-side configuration would use twice as much fuel. Some of the technical data suggests amazing fuel efficiency. To cruise at 100 mph (160.9 km/h), you would only need to use 1.7 percent of the throttle and would get 98.79 mpg (42 km/l). If you were in a real hurry and you decided to cruise at 250 mph (402.3 km/h), you would still get a very reasonable 24.7 mpg (10.5 km/l) [source: Swissinfo].

The Acabion's high-speed and excellent fuel economy sound great, but can you really drive a vehicle like this on the highway? How much does an Acabion cost, anyway? And how long would it take to build if you were to order one? Read on to find out.

The Acabion GTBO on the Road 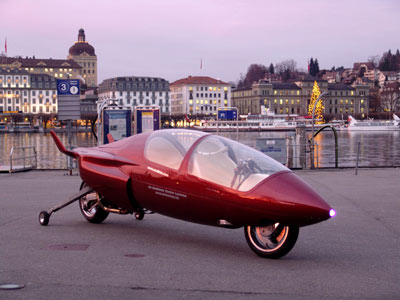 © Acabion™
Will the Acabion GTBO eventually become an affordable alternative to airline travel?

The Acabion is hand built. In fact, as of June 2008, only one GTBO exists. It's estimated that the designer has spent $30 million to develop this concept. Because of this, Dr. Maskus keeps the vehicle closely guarded, and to date, no independent tests of the Acabion GTBO have been performed by any outside source. The specifications, specifically the speeds, are based solely on the manufacturer's tests and calculations, taking into account drag coefficient, horsepower and weight.

With a purchase price tag estimated somewhere between $2 and $3 million and a lead time (production time) of around two years, mass production seems unfeasible. But the company insists the vehicle will go into production and will eventually be more affordable to the masses. Acabion plans to offer different trim levels and an electric version as well. 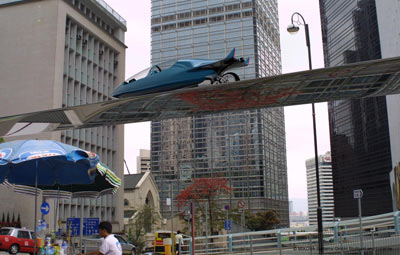 © Acabion™
Dedicated roadways, such as this elevated track, would allow the Acabion GTBO to reach the upper limits of its capabilities.

Driving an Acabion GTBO on the street may sound impractical now, but it may eventually become a reality. Clearly our roads aren't designed for a vehicle that can travel at 342 mph (550.4 km/h), so that's one obstacle. Vehicles like the Acabion would require dedicated roadways, underground tunnels or even elevated tracks to allow the jaw-dropping speeds they're capable of achieving. The designer also envisions solar-powered electric versions of the Acabion and autopilot settings that would permit the driver to hand over the driving operations. Perhaps this could eventually become an economical alternative to air travel? Who knows, we may even choose to drive ourselves on those long business trips and vacations? For now, it seems that the high price tag and lack of capable roadways may be the deciding factor in whether we'll see the Acabion GTBO in driveways around the world anytime soon.

If you think the Acabion GTBO is amazing, then you'll enjoy reading about some of the other fast cars and wild concepts in the links on the next page.