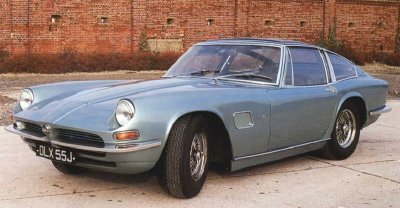 This 1971-registered AC 428 coupe shows off the Frua styling that was quite similar to that of the Maserati Mistral and concurrent Monteverdis. It’s said some body panels and glass were the same on all three.

It was in 1965, as Cobra sales peaked, that the AC company had its next bright idea -- the AC 428. The latest coil-spring Cobra chassis provided excellent roadholding and could be tuned for a softer, more “boulevard” ride than in the sports cars. Why not, thought Derek Hurlock, use it as the basis for a modern, luxuriously equipped GT?

Hurlock began scouting the various specialist coachbuilders and finally chose the Italian house of Frua. For its new GT, AC merely lengthened the Cobra wheelbase by six inches -- easy to do with such a simple parallel-tube layout -- and slotted in Ford’s 428-cubic-inch big-block V-8.

As a concession to its softer, more refined character, the new model would be offered with Ford’s C-6 3-speed automatic transmission as well as manual gearbox. Christened AC 428, the car was considerably bulkier than previous ACs, yet deliberately designed as a two-seater. Perhaps AC’s unhappy experience with the 2 + 2 Greyhound coupes of 1959-1963 had something to do with this decision.

In other respects, the new AC 428’s chassis was like that of the Mark III Cobra, with four-wheel disc brakes, all-independent suspension via coil-spring/damper units and wishbones, and rack-and-pinion steering, though center-lock wire wheels were chosen instead of cast alloys. Despite hefty curb weight, there was no provision for power steering.

The first AC 428, a prototype convertible, was revealed at the London Motor Show in 1965, but much more development work was needed before sales actually began over a year later. By then, the convertible had been joined by a glassy fastback coupe with the same lower-body styling.

In overall appearance, the AC 428 was much like the contemporary Maserati Mistral, also a Frua design. Frua at the time was also supplying bodies to Monteverdi, and since AC didn’t actually impose any of its own styling ideas, the AC 428’s similarity was, perhaps, no surprise. It is said that some body panels and glass were shared by all three.

The AC 428 was much larger and heavier than any previous AC. It was certainly a lot more expensive. The main reason was all the shipping involved. Building the AC 428 required importing Ford drivetrains from Detroit; building and then sending the rolling chassis to Italy, where Frua added the body and completed final assembly; then bringing the finished cars back to the UK for final testing and inspection. As they used to say at Avanti, the car traveled so much during production that it was out of warranty by the time it reached the customer.

For all that, sales were meager. Who, after all, was likely to buy an Italian-bodied American-powered car from a tiny British concern when they could get a genuine Italian thoroughbred with a high-revving twincam engine and a famous badge for the same money? By 1973, when the car was dropped, only 58 coupes and 28 convertibles had been produced. The oil crisis, existing and impending EEC and USA regulations, an unsuccessful battle against labor problems in Italy, and AC’s inability to undercut the pricing of firms like Aston Martin all contributed to the AC 428’s demise.

Few of these cars seem to have survived. Yet though rarer than original Cobras, their collector-market prices have long been quite reasonable, which suggests that interest has peaked. A pity, for the AC 428 is a lot faster than you’d think and has bags of style and exclusivity. One can only wonder how it might have fared with a “designer” label.