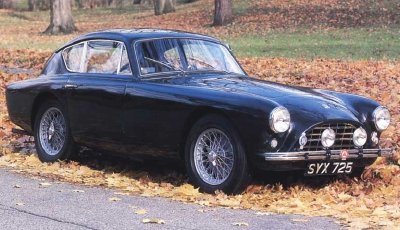 British race-driver Ken Rudd constructed the very first Ace-Bristol, but his hybrid was quickly adopted by the AC factory. First shown in autumn 1956, the AC Ace-Bristol and the companion AC Aceca-Bristol were in production by the spring of 1957. Because it was not only more powerful than AC’s own engine but capable of a lot more power-tuning, the Bristol unit made these cars, especially the Ace, much more suited for competition.

The roots of the AC Ace-Bristol design go back to the Thirties, when BMW engine design chief Fritz Feider produced a series of six-cylinder engines that culminated in the 1971-cc unit of the fabled 328. After World War II, Bristol of England “acquired” the design by somewhat dubious means (see Bristol Sports Cars) and manufactured it in the UK. By the mid-1950s, Bristol was happy to supply this noble engine to other automakers.

Complete with three downdraft Solex carburetors, the Bristol engine was tall but fit comfortably under the AC Ace-Bristol and AC Aceca-Bristol hood. It had pushrod overhead valve actuation (via complex linkages), part-spherical combustion chambers, and a very long stroke. Despite all this, it was amazingly flexible and high-revving.

For its AC application the engine was normally supplied in 105-horsepower “100C2” guise, but it could also be supplied with 120, 125, or 130 bhp. All versions teamed with Bristol’s own 4-speed manual gearbox, but apart from this, very few changes were made -- or needed -- for the transplant.

Compared with the AC-engine cars, the Bristol-powered Ace and Aceca had a lot more performance but were only a few pounds heavier, so they generally recorded similar fuel consumption figures. It was thus not surprising that though more expensive, they soon began outselling the earlier models, and eventually came to dominate the scene at Thames Ditton.

Naturally, chassis and other improvements were shared with the AC-engine cars. Both the AC Ace-Bristol and AC Aceca-Bristol were offered right from the start with Laycock overdrive (which operated on top, third, and second gears) as an option, and got front-wheel disc brakes as standard during 1957.

Although basic styling was not changed, the AC Ace-Bristol could be ordered with a curved, instead of flat, windshield beginning in 1958. You could also order a cowl for covering part of the radiator air intake, which reduced drag slightly and increased top speed to more than 120 mph.

The interior of the Ace-Bristol was virtually identical to the original AC Ace.

In 1961, Bristol dropped a bombshell on the British specialty car market by announcing its new 407 with Chrysler hemi V-8 power -- and would soon phase out the old six. This meant that the AC Ace-Bristol and AC Aceca-Bristol were living on borrowed time and that AC needed to find an alternative engine fast. Eventually, AC wedged in the 2553-cc six from the British Ford Zephyr (allied to a Moss gearbox), offered in various stages of tune from 90 to 170 bhp (SAE). It proved very unsuccessful though: only 46 such cars were ever produced.

By 1962, assembly of the Bristol-engine cars was cut back to accommodate the buildup of Shelby Cobra production, though the last of the type wasn’t actually built until spring 1964.