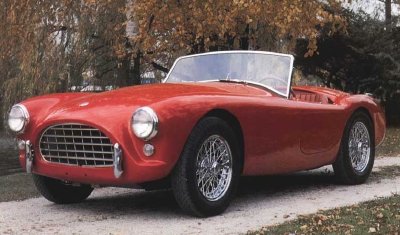 AC had a much larger career and impact on the world of sports cars that its contribution to the Shelby Cobra. See more pictures of the AC Sports Cars.

Mention AC sports cars, and the average American auto enthusiast is likely to link the letters with the name Shelby. That would of course conjure the AC Shelby Cobra, an iconic combination of British roadster body, American Ford V-8, and the imagination of Texan Carroll Shelby.

But as you’ll learn in this article, AC’s sports car legacy goes deeper than being party to the Cobra phenomenon in the 1960s. This small British firm has a respectable performance portfolio of its own, and a history that dates to 1900.

That’s when Autocarriers was established in England to assemble automobiles. It became AC in 1922 and had great success with an efficient little three-wheel van powered by a one-cylinder engine. It had another hit with a 2.0-liter six-cylinder engine introduced in 1919. Despite these bright spots, however, the company seemed prone to stagnation; the six-cylinder, for example, was in production until 1963.

The Great Depression and World War II were particularly unkind to AC, and it took the AC Ace of 1953 to turn things around. Based on a race car, good looking, and making fine use of that evergreen six, the Ace and its Aceca coupe companion were strong sellers. An engine transplant in 1957 created the faster AC Ace-Bristol and AC Aceca-Bristol. These six-cylinder sports cars retained the Ace’s handsome looks and were prelude to the V-8 AC Shelby Cobras, which emerged in 1962.

Not content to leave all the V-8 glory to Shelby, AC in 1965 created the AC 428. This was based on the Cobra chassis, but was no rip-roaring roadster. Instead, AC added six inches to the Cobra’s wheelbase and had Italian coachbuilder Frua fashion a snug fastback coupe body. Underhood was Ford’s 345-horsepower 428-cubic-inch V-8.

The AC 428, which also offered a convertible body, was a valiant attempt at an exotic GT, but never captured the imagination of enough buyers who could afford its steep price.

Still, it showed that AC was more than just a Cobra donor, even while it lived in the Cobra’s shadow. We'll get started on the next page with the AC Ace and Aceca.