Chevy introduced a C5 hardtop, casting the 1999 Corvette as the car for serious performance enthusiasts. Essentially a convertible with a fixed fiberglass roof, the hardtop's beefier structure made its body 12 percent more rigid than the coupe with the targa panels in place, and the car weighed some 92 pounds less. Plus, it retained the convertible's external trunk.

While not exactly inexpensive, the hardtop did cost $394 less than the coupe. Yet it came with the 345-hp LS1 small-block V-8 under the hood and was fitted with the six-speed manual transmission (its only available gearbox) and the Z51 Performance Handling suspension, which otherwise added $1,165 to coupes and convertibles. Exterior colors were limited to blue, pewter, red, and white; and only the base black leather seats were offered -- without power adjustments. Several weight-increasing options were unavailable on the hardtop, such as the Real-Time Damping suspension. Likewise, a number of comfort-and-convenience items were restricted only to the coupe and convertible.

Enthusiast-publication reviews of the slimmer 1999 hardtop were generally quite positive, though their actual road tests showed only slight improvements in performance. Car and Driver, for example, reported a 0-60 mph time of 4.8 seconds for the hardtop compared to 4.9 seconds for the coupe, and a quarter-mile clocking of 13.2 seconds at 110 mph versus 13.3 seconds at 109 mph. What's more, the hardtop's exterior was slightly less aerodynamic than the targa-top's version. Therefore, it reached a lower maximum speed of 169 mph in Car and Driver’s tests, while the coupe was able to make it all the way to 171 mph. Still, every tenth of a second apparently counted to die-hard enthusiasts and weekend racers; Chevy was able to sell 4,031 hardtops for 1999.

One new feature offered for 1999 coupes and convertibles was borrowed from high-tech fighter-jets: The $375 RPO UV8 was a sophisticated "Head-Up Display" system that projected instrument readouts onto the windshield so the driver could keep his or her eyes fixed on the road. Appearing in the lower left-hand area of the windshield, the driver could customize the display to include the full complement of readings, or just the speed, rpm, and/or other selected information. A "check gauges" warning would indicate times the driver needed to pay attention to a dashboard gauge or warning not duplicated on the head-up array.

Also added for 1999, and limited to coupes and convertibles at an extra cost of $350, was a power telescoping steering column that offered plus or minus 20mm of travel over the fixed-shaft version; the wheel's standard tilt function remained manually operated, however. Likewise, newly optional automatic-engaging "Twilight Sentinel" headlamps, priced at $60, were also excluded from hardtops. The $3,000 magnesium wheels returned to the options list and were also offered only on coupes and convertibles.

All 1999 Corvettes benefited from modifications to the car's magnetically variable power-steering system, implemented to make steering more sensitive and with less of a tendency to "wander" at highway speeds. So-called "next generation" airbags were designed to deploy with less force than before to help reduce airbag-induced injuries sustained in collisions.

In a serious performance statement, Corvette returned to factory-backed racing in 1999. Competing as a production-based sports car, the new C5-R was designed as a GTS-class racer that maintained the integrity of the production Corvette and shared a number of standard-issue components. These included the stock Corvette frame, engine block, windshield, taillights and marker lights, power steering pump, steering rack, alternator, water pump, and assorted suspension components. But it was almost four inches wider, had a carbon-fiber body that was loosely based on the production car's exterior, and its engine produced 255 more horsepower than a conventional Corvette.

The C5-R quickly established itself by finishing third in its GTS-class debut at the Rolex 24 Hours of Daytona and claiming third place in the GT2 class.

Corvette thus began the new millennium with renewed momentum on the track, where it did battle with Vipers and Porsches; and on the street, where sales were healthy and performance unquestioned. America's legendary sports car was thriving. 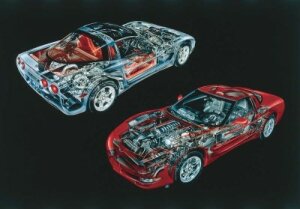 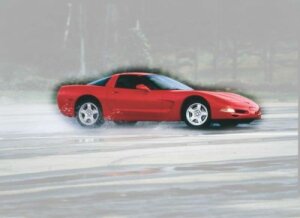