5 Tips for Starting an Old Engine

Browse the article 5 Tips for Starting an Old Engine 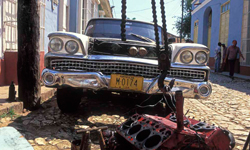 If you've ever tried to start an old car that's been sitting unused for a long time, you know that it isn't always as easy as just turning the key.
Ian McKinnell/Photographer's Choice/Getty Images

If you've ever had an old car sitting around for a while you know that getting it started and back in running condition isn't always easy. Engines were made to run and to be run regularly. The longer they sit idle the more they can develop problems you'll have to deal with later.

Think of an old engine like your body. The less exercise you get the more your body gets used to not exercising and the harder it is to start working out. Your body may even be more likely to suffer injury because the muscles aren't used to that level of physical activity. A car works in a similar way. When the moving parts of an engine sit for too long and aren't used or properly lubricated they have a tendency to get stuck and become resistant to movement.

But the mechanical parts aren't the only things that go bad when a car sits around. Old oil, antifreeze and gasoline don't hold up well when sitting in an engine for months or even years. Fluids break down, seals leak and corrosion sets in on various parts of the engine. And the delivery systems that move these fluids like fuel and oil pumps, hoses and filters can all cause problems when starting an old engine. When your vehicle has been sitting unused, all of the fluids that once made the vehicle run may now be working hard against you to prevent it from starting.

An old engine may be difficult to get started, but it's not impossible. Every engine is different, but there are a few general techniques that can be used get an almost any engine in running condition once again. Just remember, it's likely that you'll have to use more than one technique listed here to get your engine started. 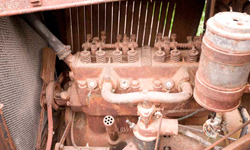 You might need to pour a small amount of penetrating oil directly into the cylinders to get things moving.
Robert A Pears/Photodisc/Getty Images

When an engine is really old or has been sitting unused for a long time the internal components are going to be less likely get going. You can liken it to Newton's first law where he said that an object at rest tends to stay at rest. This just means the engine will need a little coaxing.

There are two different ways to get the engine to turn over at this point. In some cars you may be able to turn the engine over using a socket wrench on the crankshaft nut or you could hook up a battery to the ignition. Any oil that's in the cylinders will come out when you do this. If the engine turns over after you crank it then it may start up once the spark plugs are replaced. If your engine has a carburetor some people recommend spraying starting fluid into the carburetor to help get the engine started.

Getting the engine to turnover is a good sign, and if you've already corrected some other problem areas then the above suggestion may be all you need. But even if everything is working properly with the engine there still are several other factors that you need to inspect before you can get the engine running for good.

Replace the Fluids and Filters

One way to start up that old engine is to make sure the fuel, oil and engine coolant are all flowing properly. We already talked about lubricating the engine before you turn it over, but another major factor that causes old engines not to start is old gas.

Gas is a highly refined product that vaporizes and combusts easily. The same chemicals that give gas these properties are also the ones that allow it to evaporate over time and cause the gas to lose its ability to ignite easily. In addition to evaporation, a process called oxidation can occur, when chemicals in the gas mix with oxygen. This produces deposits in the gas that can clog fuel lines, fuel filters, the carburetor and fuel injectors. Gasoline that has ethanol in it also tends to draw moisture out of the air and can contaminate the gas as well.

To start an engine that has old gas in it, you may need to pump fresh gas into the system from an external source. You may also need to completely remove the old gas from the tank and fuel lines before trying to start the engine.

In addition to replacing the old gas, the antifreeze will likely need to be replaced as well. Antifreeze breaks down over time and forms acids that can hurt your engine. Some people recommend using water, instead of coolant, when you're first starting the engine. If there's a problem with your head gasket, you don't want antifreeze (or water) leaking into the cylinders.

If your coolant and the gas are good you may still need to replace the fuel filter and oil filter to get the engine started, or at least to keep it running. The old filters will likely be clogged and they'll keep you from getting oil and gas to your engine.

If changing the gas, coolant and the filters doesn't work for your engine, you may need to try a different approach.

The easiest problem to diagnose and fix is the battery. Car batteries are made up of a lead-acid or lead-calcium system that converts chemical energy into electrical energy. Batteries go through a recharging cycle when the alternator sends a current to the battery's internal plates and back into the electrolyte mixture inside the battery.

When a battery isn't being used, the chemical reaction in the battery breaks down and causes it to lose its energy. If the battery sits long enough it will be ineffective for starting up the engine. If the battery isn't that old, and it's a maintenance free model, you may be able to add a little distilled water to it to see if you can generate the charge. If it's been sitting unused for a really long time, it's best to install a new one.

In addition to checking the battery, inspect the ignition coil and coil wire. Use a multimeter on the coil to see if the resistance reading matches the recommendation for your vehicle. If it doesn't, then the coil may be bad. If the coil and its wiring work, use a current reader to see the starter motor is receiving a current. Corrosion or bad wiring can inhibit the starter motor and prevent the engine from firing up.

If your electrical systems are working and the car still won't start, you'll need to try a different approach. 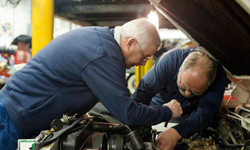 When an engine sits idle for a long time, all of the hoses can deteriorate and develop cracks.
Reza Estakhrian/Iconica/Getty Images

Your engine creates a vacuum when the intake valve is partially closed in the intake manifold. The vacuum is then used to help power other components on the car. It may help reduce your effort in pressing down the brake pedal or, in older cars, it may even power the windshield wipers. If enough vacuum hoses have leaks, or you have one big leak, it may keep your old engine from starting.

In newer cars, some vacuum leaks can cause engine sensors to report incorrect readings to the engine's computer system. When this happens, even minor leaks could keep your engine from starting. A few trouble spots for vacuum leaks may be the throttle body, the manifold seals, the positive crankcase ventilation (PCV) valve or the PCV hose. Although those may be some trouble spots, there are numerous vacuum hoses in each car.

When the engine sits for a long time the hoses can deteriorate and develop cracks. A few small leaks won't keep your car from starting but large leaks, or too many small ones, may be too much. There are several ways to determine if you have a vacuum leak, but the most effective is using a smoke generator. This smoke-out tool generates smoke in the engine so you can see where the vacuum leaks are coming from in each hose.

This tool is somewhat expensive and usually used by professionals, so it may be a better idea to locate a diagram of your engine's vacuum hoses and replace them all instead. Replacing all of the hoses in an old engine isn't a bad idea, considering you could spend a lot of time trying to track down a leak and you'll be replacing several hoses either way.

Timing belts, or chains, are the part of your engine that keeps the camshaft, distributor, crankshaft and pistons in sync. When the timing belt breaks or is damaged it can keep the engine from starting up. Most timing belts will last about 60,000 miles (96,561 kilometers) but if your engine has been sitting for a long time it might be a good idea to inspect it.

Many cars use reinforced rubber belts, but older cars and many newer luxury cars still use metal chains. In either case, a broken timing belt (or chain) will inhibit your engine from starting.

Although it may take only a few minutes to actually slip the belt on, getting to the belt might not be all that easy. It's likely you'll have to take off multiple hoses, move electrical wiring and remove other engine components to gain access to it. Once you're able to access the belt you'll have to make sure to align the crankshaft and camshaft markings and ensure the number one piston is at top dead center (TDC). If you don't get this exactly right you can throw the entire engine off its timing and probably cause some serious internal damage when all of those metal parts start crashing into each other.

Needless to say, changing the timing belt isn't for everyone. It requires a high level of skill, and in some cases, it might even require taking off an engine mount to gain full access while suspending part of the engine as you work on it. If your timing belt or chain is old, stretched, worn or broken though, you'll need to replace it to get your engine started. Consider taking it to a mechanic if you don't have the tools and skill required to replace it.