Flying Cars Are Hard to Drive in Bad Weather 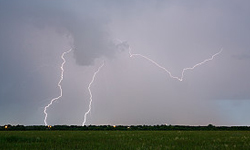 Consider the fact you'll also be flying through thunderstorms from time to time.
Jeremy Woodhouse/Photodisc/Getty Images

Let's assume that if we all have flying cars, we're going to have some sort of aerial road system like in "Back to the Future Part II." We'll assume that there are on and off ramps, designated areas to fly and some sort of overall organization structure to how to get from point A to point B.

Maybe we won't have to worry about a bottleneck from an accident because the involved parties won't have the option to block our path, but we'll still have deal with bad weather messing up our commutes.

Imagine flying in your car and getting hit by a huge gust of wind. Your flying car will respond to wind differently than a car on the ground. Planes encounter different types of turbulence all the time [source: Williams]. But you may not be so used to it when you're the one flying. Depending on the air temperature it may be harder to take off and land your flying car too, since the air density can affect a plane's aerodynamics [source: NASA]. When the seasons change, the way your flying car performs will change, too.

Consider the fact you'll also be flying through thunderstorms from time to time. Imagine flying in the air during a wild lightning storm. It may look cool when you're on the ground, but it'll be pretty scary when you're flying right through it. Lightning regularly strikes airplanes [source: Williams]. Are you ready for lightning bolts to hit your car as your struggle to keep control of the wheel?

Another weather concern will be flying in heavy rain or fog. Flying in the air and not being able to see would be really disorienting. A set of fog lights and some Rain-X probably won't be as helpful up in the sky as it is on the ground. It's hard enough to stop on the pavement to avoid an accident, but what if you can't see through the fog and another flying car is just a few feet away?

Poor weather conditions can be difficult enough to manage in car with four wheels on the ground, let alone one that's up in the air. But that's not the worst of it. Go on to the next page to find out the main reason why you don't want a flying car.