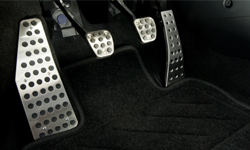 Floor the accelerator and you're going to use more gas than someone who accelerates gradually.
© iStockphoto.com/Andrejs Pidjass

The biggest variable in how much gas an engine uses isn't completely in its technology. It's in how it's driven. It's simple, really: Floor the accelerator and you're going to use more gas than someone who accelerates gradually. There's a reason fuel economy estimates always note that your mileage may vary.

But, car companies are finding ways to train drivers to drive more efficiently. By letting the driver know when they're driving efficiently, the engine can spend more time operating at levels where efficiency is optimized. For example, the Kia Forte and the 2011 Honda Odyssey have green lights on the dashboard that indicate when they're being driven efficiently. And they're not the only ones -- several carmakers have similar driver efficiency indicators. The manufacturers hope that drivers will treat keeping the efficiency light on as a sort of game, increasing their overall efficiency and decreasing fuel consumption.

Another feature that many new cars have is something called eco mode. While eco modes are common on hybrids, automakers are beginning to add them to gasoline-only cars as well. In most cars, eco mode is activated by pushing a button. That changes the transmission shifting characteristics to keep the engine operating at lower speeds. Since the engine isn't working as hard, it doesn't use as much fuel. Though eco mode doesn't work in all driving situations (it can provide some lag on the highway, for instance), for around town driving it can definitely help you use less gas.

For more information about new gasoline engine technologies and other related topics, follow the links below.