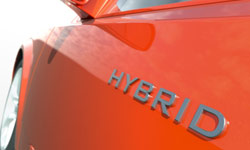 Image Gallery: Hybrid Cars Want to save money on gas? Love cutting-edge technology? Knowing your motivation for buying will point you toward the features you want in a hybrid. See more pictures of hybrids.
Hemera/Thinkstock

In 2001, your choice of hybrid cars in the United States was limited to two models: the Honda Insight and the Toyota Prius. By 2010, you could pick from 27 models of cars that used both a gasoline engine and an electric motor for greater fuel efficiency. Come 2015, about 55 different hybrids are expected to be available [source: HybridCars.com].

Hybrids have arrived. Early models might have appealed largely to the greener-than-thou crowd or serious techies, but as hybrid versions of popular cars like the Honda Civic and the Toyota Camry have appeared, interest has definitely gone mainstream. More than 290,000 hybrids were sold in the United States in 2009 [source: HybridCars.com]. And if the government, as some expect, boosts the mileage requirements for U.S. fleets to 60 miles per gallon by 2025, hybrids are bound to play a part in our auto future [source: HybridCars.com].

There are reasons why hybrids are appealing to a wider audience. Their mileage is increasing: The first-generation Prius chalked up a combined mileage of 41 miles per gallon; by 2010 it was getting 50 miles per gallon [source: Vijayenthiran]. To attract buyers, car makers often fit hybrids with luxurious interiors and all the latest gadgets. As a bonus, the cars now boast better performance and faster acceleration.

How do you decide if a hybrid is right for you? Which one do you want? Because it's a rapidly developing technology, choosing a hybrid takes some thinking. Read on for five tips that will help you make an informed hybrid decision.