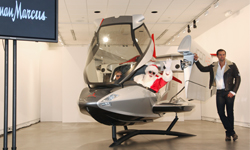 So technically, the Icon A5 personal amphibious plane is not a flying car. But you could consider it, technically, to be a "roadable" aircraft.

That's because the A5's folding wings make it compact enough to fit on a trailer that you could tow with your truck or SUV. Icon, the company that makes the A5, is marketing this light "sport" airplane primarily as a plaything, not a workhorse for commuting or business trips. Company officials are positioning the A5 as a plane that will bring the "romance" back to flying by enabling couples' getaways to remote and pristine spots.

The A5 has retractable landing gear and a hull-shaped fuselage that make it capable of operating from a runway as well as from the water's surface. It requires a mere 750 feet (228.6 meters) for takeoffs and landings.

Former Air Force fighter pilot, Stanford Business School graduate and Icon co-founder Kirk Hawkins has said the company began to take advantage of FAA rules that created a sport aircraft category in 2004. Icon is seeking to exploit the market niche created by those rules by designing an airplane that's small (34-foot (10.4-meter) wingspan), lightweight (less than 1,000 pounds (453.6 kilograms)) and easy to fly (Hawkins says a non-pilot can be trained to fly one in as little as two weeks) [source: Icon Aircraft].

The plane has successfully flown and could be available to customers by fall of 2011 for around $140,000.

But let's say, for instance, that you don't want to compromise on the "car" portion of your flying car? The next vehicle promises sports car performance on the ground, along with a not-too-shabby 275-mile per hour (442.6-kilometer per hour) air speed.