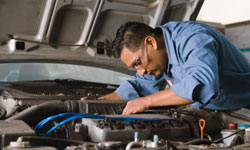 What can you change about your car to give it a little more kick? Explore these car engine pictures!
Jupiterimages/Comstock Images/Getty Images

For some auto enthusiasts, the car that rolls off of the assembly line isn't quite up to speed, so to speak. Some drivers love to tinker with their cars' engines, adding more power or improving fuel-efficiency. But what can you do when you want to feel a little more rumbling coming from that engine?

Ordinarily, an engine handles air intake this way: A piston moves down, creating a vacuum, allowing air at atmospheric pressure to be drawn into the combustion chamber. Combined with fuel, it forms a unit of energy, which is turned into kinetic energy (or horsepower) via combustion, thanks to an ignition from the spark plug.

To improve a car's performance -- in other words, to make it go faster, something all car aficionados and gearheads crave -- would require more powerful, or at least more efficient, combustion. More fuel alone going into the engine wouldn't work, because of the delicate relationship between the oxygen in the air and the fuel required for the combustion. Instead, modifying your car's engine to accept more air and fuel is the key. Here are five ways to modify your car to make that happen.

A supercharger pressurizes air intake to above the normal atmospheric level so that more air can go into the engine, thus combining it with more fuel to produce more power. Powered mechanically via a belt or chain from the crankshaft, a supercharger spins at a rate of at least 50,000 RPM (faster than the engine itself) in order to force air into the combustion chamber. This makes space for more fuel, which creates for a larger combustion.

How much more energy is produced? Nearly 50 percent more horsepower, if everything is installed correctly. Attaching one to the engine of a normal sized car will immediately make it behave like a much larger, more powerful vehicle. What's great is that it can be a do-it-yourself project -- simply bolt it to the top or side of the engine and follow the manufacturer's installation instructions.

Be aware that some of these modifications may void your car's warranty. 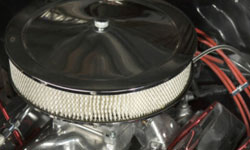 You can add a secondary air filter to what's already in your car to improve efficiency.
Thinkstock/Comstock Images/Getty Images

Aftermarket air filters allow for more airflow into the engine for a more efficient use of the air/fuel combination, while also blocking contaminants and impurities that slowly degrade performance over time. Secondary air filters are generally made up of a thin layer of cotton or other material housed between several layers of impurity-catching thin mesh. High-quality aftermarket air filters (versus the standard, paper-based ones that come straight from the factory) drop into the engine's air box, and that's about it for installation. And because they're made of fabric, they're washable, making for an inexpensive, reusable performance enhancer.

Although it might seem like a small thing, the temperature of the air can affect the efficiency of your car. A cold air intake kit is an aftermarket system that brings cool air into the internal combustion engine. Normally, a car regulates the temperature of air as it enters the engine, providing warm air when the engine is cold, and cold air when the engine is warm. Cold air intake kits, however, can lead to higher performance and engine efficiency, based on the idea that colder air is denser than warm air, which means that it contains more of that necessary oxygen for a more dynamic combustion in the engine.

Unless you really know your way around an engine, this one is best installed by a professional, as it involves replacing and/or upgrading many elements of the car's existing air intake system. 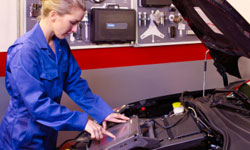 If you drive a late-model car, it's highly likely that there's an onboard computer regulating things and running the show, controlling such functions as timing, anti-lock brakes and the all-important fuel-to-air ratio. Performance chips (or superchips) are "hacks" that can be installed to override factory settings, and they're most attractive to gearheads since they can increase the power of the engine and horsepower. A performance chip sets new parameters for the functions of your choosing, such as telling your car's engine to use gas slightly more efficiently, or to intake more air for a bigger combustion. Installation is easy and DIY -- once you acquaint yourself with your car's electronics, simply take out the factory chip and plug in the new one, just like plugging in a chip in a desktop computer.

Lightweight things move faster than heavier things -- that's as basic as physics can get. This solution is simultaneously low-tech and work intensive, in that it involves switching out heavier parts of the car (throughout the car, not just in the engine block) with lighter parts so as to make the car lighter and more aerodynamic. There are a lot of options: get rid of extra seats you don't use if you don't cart a lot of people around; replace glass windows with lighter plastic or acrylic versions; or even remove parts of the dashboard. Disc brakes even offer significant weight difference over traditional brakes.

For lots more information on engine performance, see the links on the next page.

Lighter, more streamlined tires and wheels made out of lighter metals can also improve your car's ability to glide through the air with increased speed.