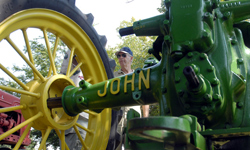 The Waterloo Gasoline Engine Company was founded in Waterloo, Iowa, after its founder invented the first usable gasoline-powered tractor in 1892. Despite this technological advance, the tractors were not at all popular, and the company was sold in 1895. It puttered along making engines until 1911, when it took another stab at building tractors. The company finally hit pay dirt when it introduced the Waterloo Boy Model R in 1914. Unlike the first model, of which just four were built and only two were sold, more than 8,000 of the Waterloo Boy Model R tractors were sold between its introduction and 1918, when it was discontinued.

The company was purchased by John Deere in 1918, and the Waterloo Boy models became the basis for the green giant's two-cylinder tractors. Examples of the Waterloo Boy tractors can be found today in the John Deere Pavilion, the museum dedicated to the history of the famous green machines.