Appeal for the Herd 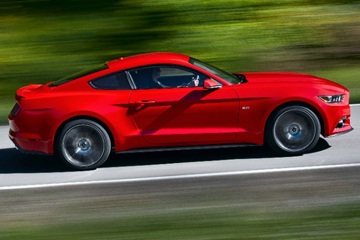 The Ford Mustang's engineers and designers are aware of the consequences of modernizing a classic car, yet they really have no choice. A redesigned car has to be more fuel efficient, thanks to government regulations and public pressure; it also has to meet the latest safety criteria, which often means incorporating new technology; and it has to keep an eye on the competition and be aware of the direction the market is going, which will help the car attract new buyers -- that's crucial for its survival.

But a new generation of a classic car can't offend the purists, even when those die-hard fans' expectations are totally unrealistic and maybe even a decade or two behind the times. A lifelong fan might be turned off by a feature like climate-controlled seats; however, a potential customer who's used to well-appointed import cars might not even consider buying a Mustang without them. Take the aforementioned drivetrain options as another example. While Ford's understandably proud of its EcoBoost powerplant, the engineers know it won't really appeal to people who have fond memories of the Mustangs of yore. So while the EcoBoost four-banger did get a mention (and it may actually work to attract a specific segment of new car buyers), when it came time to talk engines, Ford preferred to focus on the traditional V-6 and V-8. And they also mentioned how the car's new technology would enhance the driving experience, rather than distract from it.

Pre-production cars shown during the launch featured controls for the driver to adjust stability control, driving mode and steering. Specific driving modes are being kept quiet for now; although Ford has said there will be a performance mode as well as an inclement weather mode. Selecting different driving modes to suit conditions will adjust the car's throttle response, steering weight and stability control. These settings will be a lot easier to control in the 2015 model than in the current car, where the only setting the driver can adjust is hidden within a menu and is not easily accessible while actually driving. Other new features on the 2015 Mustang include a Track App for statistics such as quarter-mile times, and access to systems that can be adjusted by the driver, such as stability control, steering and throttle response. Pre-production cars were also fitted with Ford's MyTouch information system, which has made its rounds across several Ford vehicles of all price points, but had yet to appear in a Mustang. The new independent rear suspension is big news, too, and Ford revealed that, in early testing, the front suspension didn't perform as well as they had hoped it would -- so they revised the front setup to better complement the rear. The end result is a double-ball-joint independent front suspension, completed by MacPherson struts. Available wheels come in a range of designs between 18 and 20 inches.

Ford has sold more than 9 million Mustangs over the past 50 years, and that's with a fairly limited market. Classic American muscle doesn't have the global salability of, say, a hot hatchback or a gas-sipping family sedan, but Ford has so much faith in its new Mustang that it's time to try again. As of the end of 2013, Ford is still parceling out information about the Mustang's new technology in easily digestible chunks of fan bait, and there are still plenty of details yet to be revealed. Since the car won't be available for several months, it's easy to say that the best of the 2015 Mustang is yet to come.

I had a vague idea of the Mustang's release before it happened, but only because I have friends who work in social media in Detroit and they kept dropping employer-sanctioned hints. Like most new cars I write about, this one reminds me of something old. Something from 1993 or earlier, to be precise, because the Mustang in question was a four-cylinder. It belonged to my childhood best friend. It was flaky blue, having been refinished (at some point) with semi-gloss house paint. Though the lineage of the new Mustang can be pretty easily visually traced back through the generations, there's little (other than a four-cylinder engine!) that suggests any sort of connection between the car I remember and the car I just spent several hours admiring. There were some good memories in my friend Carrie's old 'Stang, though, and I really do believe such experiences are what ultimately keep people coming back for more.