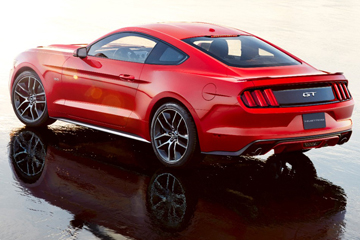 There's an interesting lineup of powerplants for the 2015 Ford Mustang, featuring three totally diverse options: a V-6, a turbo four-cylinder, and a V-8, all of which we'll discuss in more detail. Power is, of course, the primary factor in a muscle car or pony car, but fuel economy has turned into a compelling side conversation. The Environmental Protection Agency (EPA) won't weigh in on the 2015 Ford Mustang's fuel economy until much closer to its release date, when the cars are ready to be put through their paces, which means we won't get the actual miles per gallon (kilometers per liter) numbers until sometime in 2014. This is no surprise, considering that Ford hasn't even finalized the engines that will be available at release (they're pretty sure, but that kind of thing has been known to change). However, that hasn't stopped people from talking about potential fuel efficiency. Yeah, it might seem a little goofy to get all hyped about a new pony car that promises lots of smoke and melted rubber, and then wonder if it'll be good on gas. But, at least for the Mustang, there's a precedent for such a conversation.

It was around 2009 that Ford announced a Mustang model to great fanfare: the 2011 Mustang was the first car that crossed the 300-horsepower threshold, yet was capable of achieving 30 miles per gallon (12.8 kilometers per liter) on the highway, and these ratings haven't changed [source: Voelcker]. People who like cars, but also care about the environment and the depletion of natural resources, wonder if Ford plans to top those figures this time around. Some industry experts think that the time is ripe for Ford to announce better fuel economy for the 2015 Mustang, and there are a few catalysts for this speculation. First, Ford announced that the 2015 Mustang will have an option of a four-cylinder engine. Ford hasn't done that in a Mustang since 1993. It'll be a new powerplant in Ford's EcoBoost lineup of turbocharged, fuel-efficient engines. And lately, Ford tends to market the EcoBoost as a performance variant that happens to be a fuel-sipper, rather than the other way around. That's an especially convenient argument for an all-new Mustang. Ford has said this new EcoBoost will be a 2.3-liter, which, with a twin-scroll turbocharger, should strike a good balance of fun and responsibility.

However, the base model won't be the EcoBoost four-banger; it'll be a 3.7-liter V-6 that's good for at least 300-horsepower, put down through either a six-speed manual or a six-speed paddle-shifted automatic. For comparison, the base 2014 Mustang, equipped with a similar powertrain, is rated for 19 miles per gallon (8.1 kilometers per liter) city and 29 miles per gallon (12.3 kilometers per liter) highway, but federal fuel efficiency regulations mean that Ford (along with other automakers) is under a lot of pressure to improve those numbers. Then there's the top-of-the-line 5-liter V-8, also similar to the current Mustang V-8, which is projected to achieve a yield of at least 420-horsepower. Prices for V-8 models of the 2015 Mustang might inch a little higher than they have in the past, but Ford has also noted that the V-6 base model was designed so the Mustang would still have an obtainable starting price [source: Voelcker]. Ford says the V-6 and V-8 engines in the 2015 Mustang will put down more power than those found in the current lineup, even though the company is under heavy pressure to improve efficiency. And, of course, all this is subject to change, which is fairly typical when a highly anticipated new model is announced more than a year in advance. Looking farther down the road, an alternative fuel version of the classic pony car is a possibility -- and according to some sources, it's even likely. Perhaps, when the time comes for the next major Mustang premiere, there will be alternative fuel drivetrains in the lineup. An electric Ford Mustang seems unlikely now, but Ford has hinted that it's possible.