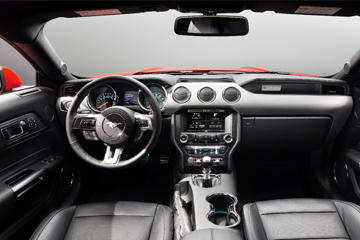 When Ford was busy whipping the press into a frenzy over the new Mustang, the brand's representatives kept alluding to a secret feature, which (of course) worked exactly as intended. The audience was hooked already, and a secret feature was just too tantalizing to forget. Finally, a few days after the initial news, someone spilled the beans: the new feature is a burnout control system, which is similar to a launch control feature, except louder, smokier and a bit more harsh on the tires. It's also brand new, the first time such a feature has been engineered into a production car.

Burnouts are kind of a ridiculous maneuver, but they do take some skill to execute properly, and Ford apparently doesn't want anyone to feel left out. Performing a burnout is a matter of revving the engine really high and then sending the engine's power to the drive wheels, which spins the tires (without moving the car forward) and makes lots of smoke and noise. It sounds like it shouldn't be able to happen, but it's relatively easy with a powerful engine and a manual transmission. And when it works, it's very dramatic. It can also be quite dramatic when it doesn't work, because, best case scenario, you'll stall out and your audience will laugh at you. Or worse, the car will launch forward out of control, fry the clutch or some other manner of catastrophe. Ford wants to spare you that headache in your shiny new Mustang, so instead of pretending that no one's going to risk showing off that way, they're installing a button to sort of encourage it, pre-engineered.

The burnout control feature is an original equipment manufacturer (OEM) first. In other words, and it can't be said enough: Ford is the first auto manufacturer to officially encourage burnouts -- let alone gift-wrap them.

And since it's an all-new feature, and Ford has been a little possessive about the details, there's only speculation so far as to how a burnout control feature might actually work. It's electronic, that much is established, which does give us some clues. Motor Authority speculates that the burnout control system could work by simultaneously enabling a lock line on the front brakes and turning off traction control at the rear wheels (because traction control prevents everything that enables a burnout to happen) [source: Feder]. As the system is engaged, the driver brings the engine's RPMs up to the optimal speed, and then dumps the clutch and the feature will do its thing. Motor Authority also hypothesizes that the feature can be disabled, although Ford hasn't chimed in to confirm or deny.

Ford has announced a list of several other high-tech features on the new Mustang. And while none of them are as exclusive (or as exciting) as the burnout control, other equipment includes adaptive cruise control and blind spot monitoring, so drivers of the new Mustang can be safe whenever they're not burning the rear tires off. Other options, such as a Track App, are an acknowledgment from Ford that a lot of these Mustangs will see some pretty hard driving.