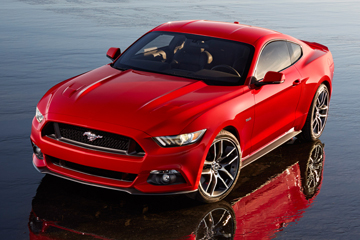 December 5, 2013 was a busy day for Ford Motor Company. The new Mustang's reveal was the result of a carefully coordinated media blitz. While most Ford higher-ups were holding down the fort at home in Michigan, others were making a bicoastal effort to release sought-after information about the new car. As the sun rose over New York City, Ford's CEO, Alan Mulally, was making the rounds on the morning news shows. In California, Ford showcased the Mustang's multi-generational appeal by unveiling the car at the TCL Chinese Theatre, where all those celebrities have their names in the pavement on the sidewalk out front. "Bullitt" star Steve McQueen's son Chad McQueen was there, too, giving the event some street cred. The Mustang even got to leave its prints (well, tire tread) in the sidewalk like a flesh-and-blood celebrity. And though the Ford Mustang might be considered one of the most all-American cars of all time, Ford is really hoping to win over some new international fans, too. So 2015 Ford Mustangs were also unveiled in Barcelona, Shanghai and Sydney, hinting not-so-subtly at the markets Ford wants to conquer.

The new Mustang will be the car's sixth generation. For 2015, the Mustang appears to warmly embrace a future direction for the model, as opposed to the fifth generation's polarizing retro styling. It's said to be the most comprehensive overhaul of the Mustang during the car's last 50 years [source: Turkus]. One of the challenges to designing such a high profile, long running car is to keep it in line with the rest of the vehicles in the brand's family, yet allowing it to retain the individuality that's helped propel and shape the brand through the decades. In other words, the new Mustang has to look unmistakably like a Ford, but it can't make people think of a Focus or a Taurus. Ford's designers told Autoblog.com that their most noteworthy inspiration was the first-generation Mustang.

The new car is shorter, wider and lower than the 2014 model, giving it a more aggressive stance and profile. The car rests on a totally new platform -- new dimensions, new floor pan and new suspension. The exterior was cleaned up to make the car's profile as smooth as possible -- no superfluous creasing allowed. The long, sculpted hood and the fastback-style rear pillars are classic Mustang elements, and the new diagonally striped headlights were designed to look menacing.

The interior was also overhauled, and the biggest difference is an upgrade in materials quality. Two interior themes were initially developed -- an aviation-inspired cockpit, and a cabin that could have been at home in a luxury sedan. Neither of those options won out. Instead, the best elements of both were chosen in a way that worked together. There are still some hard plastics to be found here and there, which were a sticking point with some fans of the car's previous generation, but overall, the cabin appears more generously appointed, yet tech-forward. It's also roomier than the outgoing car's cabin. The material quality, fit and finish are critical to successfully executing such an approach. And finally, the Mustang was engineered to be more fun to drive than ever before, with better handling than its predecessor as well as a lot more driver input.

As usual, the sixth-generation Mustang will also be available as a convertible, which will have an electrically operated fabric top, engineered to operate faster and quieter than in recent years. And when the convertible model of the new Mustang hits streets, it'll be the only drop-top car left in Ford's entire lineup, according to Mulally. The 2015 Mustang will be built domestically at Ford's Flat Rock Assembly Plant (in Flat Rock, Mich.), and will hit dealerships sometime in 2014. 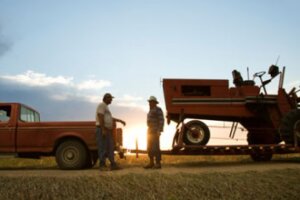