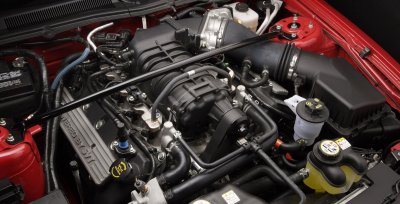 The Ford Shelby GT500 development program was led by none other than Hau Thai-Tang, Mustang's chief engineer who was recently promoted to director of Advanced Product Creation and head of SVT. "Our goal was to build the most powerful, most capable Mustang ever," he said.

Ford's performance claims were in line with his assertion: 0-60 mph in four seconds flat, a 12.5-second quarter-mile at 116 mph, and at least 0.94g of skidpad grip.

Testers had some trouble matching those numbers. The Shelby GT500 was hampered by a 3950-pound curb weight, some 600 pounds heavier than a two-seat Chevrolet Corvette coupe, for example. Significantly, where the Mustang GT put 53 percent of its weight on the front axle, the Shelby GT placed 57 percent of its weight there. Blame the iron block V-8, supercharger, and water-to-air intercooler.

Nonetheless, handling was balanced and predictable, and ride quality was surprisingly compliant, making the Shelby GT500 a credible everyday high-performance car. And the price was relatively friendly, too. The Shelby GT500 coupe started at $40,930, the convertible at $45,755. That compared with $69,175 for the 505-horsepower 2007 Chevrolet Corvette Z06. A 400-horsepower Corvette coupe with the Z51 suspension and six-speed manual listed for $47,115.

The '07 Shelby GT500's handling was balanced and predictable, and ride quality was surprisingly compliant, making it a credible everyday high-performance car.

Road & Track pitted the Shelby GT500 against those very Corvettes, and for grins added a 300-horsepower Mustang GT/CS to the comparison mix.

Ford electronically limited the GT500's top speed to 150 mph. Even without the limiter, Ford said the car's aerodynamics would hold it below 170 mph. With no speed limiter, the Z51 Corvette did 186 mph.

Still, the Shelby GT500 had a presence and a spirit and enough usable performance to do any part of its name proud. That name, as you'll see on the next page, continued to hold plenty of appeal to Mustang and its customers.