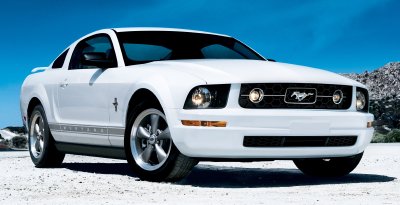 The 2006 Ford Mustang wasn't itself altered significantly as it carried the redesigned car into its second season. But that certainly didn't mean there was nothing new in Ford's pony car stable.

A new option package enabled buyers to dress base Premium models in GT trim. This $1195 Pony Package included small GT-style grille-mounted fog lamps and a rear spoiler, plus ABS and traction control. It also added a GT-inspired suspension featuring a larger front stabilizer bar, plus a rear stabilizer bar and P235/55ZR17 tires on painted cast-aluminum wheels. With bright machined rims and unique tri-bar Pony center caps, these were the largest factory wheels and tires ever fitted to a V-6 Mustang. And GTs finally were available with the extra-cost 18-inch wheels.

Bigger news came not in the showroom, but on the car-rental lot, of all places. Head of Ford design, J Mays, had said back in 2004 to expect a series of special-edition Mustangs to keep the stallion kicking, and it didn't take long for some exceptional variations on a winning theme.First to be announced was the Shelby GT500. This came in Spring 2005 at the New York Auto Show. But that was well ahead of the car's introduction as a 2007 model. Announced at the 2006 New York show, and introduced as a 2006 model, was the Ford Shelby GT-H.This was a throwback to the famed Shelby GT350H "Rent-A-Racer" program from the 1960s. Ford Motor Company, Shelby Automobiles and the Hertz Corporation partnered to produce a special run of 500 performance-modified Mustang GTs and called them the Shelby GT-H.The H stood for Hertz. The cars were available for rent exclusively through the Hertz Fun Collection at select airport locations in Arizona, California, Colorado, Florida, Hawaii, Massachusetts, Nevada, Oregon, and Washington.The program recalled the 1966 teaming of Shelby and Hertz that got Shelby Mustang GT-350s into the hands of rental customers. Those Shelby GT350H Mustangs became sought-after collector cars.Prepared with assistance from the Ford Racing Performance Group, each Shelby GT-H wore black exterior paint set off in gold by Shelby's traditional "Le Mans" dual racing stripes. Rocker stripes included Shelby GT-H nomenclature. Each car wore a Hertz Edition emblem on the front fenders, Hertz Shelby GT-H sill plates, and a numbered dashboard badge with Carroll Shelby's signature.

Ford Racing Performance Group supplied its popular Power Pack kit to add 25 horsepower to the 300-horse Mustang GT 4.6-liter V-8. It raised torque by 10 pounds feet to 330. With the unpredictable skills of rental customers in mind, all 500 GT-Hs got Mustang's five-speed automatic transmission. In place of the 3.31:1 rear axle ratio used by automatic GTs, however, the GT-H got a Ford Racing 3.55:1 ratio rear axle assembly.

The package included Ford Racing's 90mm Cold Air kit, the Muffler Kit, a new X-pipe similar to the one used on the Ford Shelby GT500, and a performance calibration and a cat-back performance exhaust.

To put that extra horsepower to the ground, the Ford Shelby GT-H came with the Ford Racing Handling Pack that included special-tuned dampers, lowering springs, sway bars and a strut-tower brace.

Getting your hands on a rental Ford Shelby GT-H wasn't easy, but reviewers and enthusiasts enjoyed the ride. Keep reading to learn about the quick and fun-to-drive Ford Shelby GT-H rental racer.

The Mustang saga involves scores of specifications and key events. Here are the best: