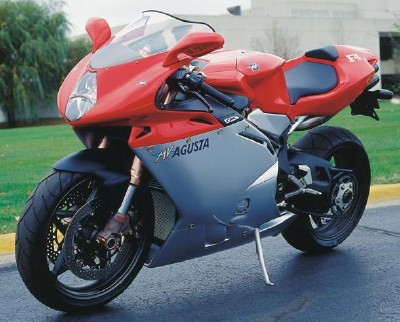 Twenty years after the last production model rolled off the assembly line, the 2000 MV Agusta F4 Strada motorcycle heralded the return of MV Agusta. Or at least the return of the name.

In 1991, the MV Agusta name was purchased by Cagiva, an up-and-coming Italian motorcycle manufacturer that already owned Ducati.

Cagiva soon experienced financial troubles of its own, however, and it wasn't until 1997 that the revered name once again graced a fuel tank.

It was worth the wait. The initial versions of the reborn Agusta, called F4 Oro, were powered by a 750-cc, four-cylinder, fuel-injected engine and constructed of exotic, lightweight materials. Only about 200 were built -- at around $32,000 apiece.

They were followed by regular production F4s, which were called Strada. These looked nearly the same, but sold for a much more reasonable $19,000. Demand far exceeded supply, and MV Agusta once again became a name to be reckoned with.

On the next page you'll find more pictures and information about the 2000 MV Agusta F4 Strada. 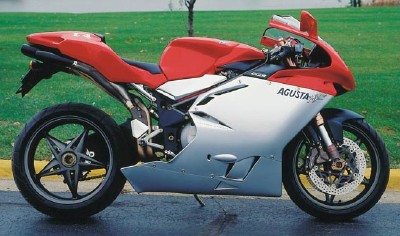 The full-production 2000 MV Agusta F4 Strada lacked some of the exotic materials used in the $32,000 limited-edition Oro version. But the F4 Strada continued the MV Agusta tradition of excellence at a price -- in this case, a still-lofty $19,000.

The instrument panel was as sleek and high-tech as the rest of the F4 Strada.
The MV Agusta logo followed the design on the last of the originals in the late 1970s.
The F4 Strada's rear wheel is typical of the the bike's efficient engineering and lightweight materials.