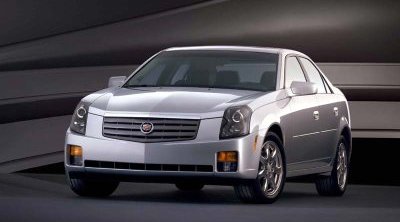 The first of Cadillac's new fleet of the decade had set sail, complete with a daring design signature called "Art & Science," in the 2003 model year. The term was shorthand for hard, angular, even disjointed lines that were meant to seem as though they originated not with a stylist's hand but with a computer -- as in fact, they did. Cadillac was after the sort of distinctiveness that made its tailfinned '50s and '60s cars so memorable. A & S was certainly different, and though not everyone liked the "stealth fighter" look, it did draw stares, which was the whole point.

Art & Science premiered with the 2003 CTS, a U.S.-built replacement for the Catera, but rather more ambitious. Significantly, this new entry-level sedan introduced the premium rear-drive Sigma platform that was also designed to accommodate all-wheel drive and would underpin other vital upcoming models.

Staking its claim as a true sports sedan, the CTS was the first Cadillac since the ill-advised Cimarron to offer manual transmission as well as automatic. Both were five-speed units, Cadillac's first. To the same end, engineers spent much time tuning the chassis on Germany's famous -- and famously demanding -- Nurburgring race track. As a result, most reviewers found little lacking in the handling department, especially when optioned with firm damping and 17-inch wheel/tire package.

Actually, even the base CTS suspension might have been a bit too Teutonic for some buyers, as the 2004 settings were softened a bit to enhance ride comfort. The sharp-edged styling was unlike anything else around, so it took a while to catch on with the public (and even some GM bigwigs).

Some evident interior cost-cutting also drew barbs. Yet overall, the first of Cadillac's new guard was a fine effort right out of the box. Consumer Guide immediately judged the CTS "an upper-echelon driving machine...a solid and sporty sedan [that] delivers good near-luxury value, listing for around $36,000 popularly equipped...There's more here than meets the eye."

A good many buyers evidently agreed, as CTS sales got off to a strong start, helped by attractive base prices in the $30,000 range. Cadillac built nearly 75,700 for the extra-long debut model year. The tally dipped below 60,000 for '04, but recovered the next year to over 69,000. This was good going in light of the brash styling and an increasingly difficult market. At last, Cadillac seemed to be on the right track.

Cadillac would also be on the racetrack. Learn about Cadillac's hot-rod CTS-V next.