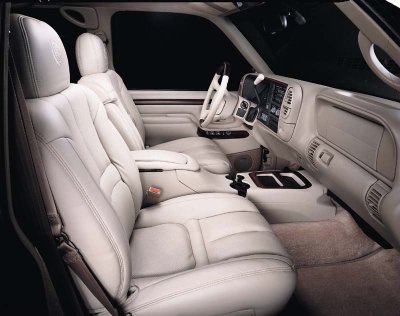 A success from the start, the Escalade revitalized Cadillac.
This is an interior shot of the 2000 Escalade.

The Cadillac Escalade serendipitously began Cadillac's image rehabilitation. From the first, it sold quite well for a premium SUV, and kept on selling even after soaring gas prices scared off many prospects in the mainstream market. And why not? Anyone who could splurge on a $50,000-$70,000 rig wasn't likely to worry about pump prices -- or big-truck fuel thirst.

Wasting no time capitalizing on its unexpected hit, Cadillac added the Escalade EXT for 2002, a full-bling take on Chevrolet's new Avalanche four-door SUV/pickup. Riding a 130-inch wheelbase, EXT combined a five-foot-long open cargo box with GM's novel "midgate," a panel that folded forward together with the rear seats for carrying items up to eight-feet long with the tailgate closed. The midgate also served as a housing for a standard power drop-down rear cab window. Following for 2003 was an ESV wagon, based on the 130-inch-wheelbase Chevy Suburban/GMC Yukon XL. Both Escalade wagons came with three-row seating for seven or eight status-seeking passengers. The EXT carried five.

An innovative midgate was introduced with the 2002 Escalade EXT.

Except for an early two-wheel-drive version with a 5.3-liter V-8, all Escalades through 2006 carried a 6.0-liter pushrod V-8 with 345 bhp, delivered through a four-speed automatic transmission to an all-wheel-drive system without low-range gearing. Also exclusive to Escalades among T800 trucks were Cadillac's automatic-adjusting Road Sensing Suspension and a specific dashboard.

No one was more surprised by Escalade's strong youth appeal than Cadillac itself. But appeal it had: a shiny big bruiser with a street-tough attitude and interior glamour fit for a music video. By mid-decade, the Escalade line accounted for nearly 40 percent of total Cadillac sales. To division marketers and GM accountants, this was manna from heaven.

All three Escalades returned for 2007 with a full redesign on GM's much-improved T900 platform. Dimensions weren't greatly changed, but styling was, becoming "more Cadillac" to set these trucks more clearly apart from corporate siblings. The powertrain was also new and again exclusive, comprising an upsized 6.2-liter V-8 with a rumbling 403 bhp and a six-speed automatic transmission. AWD remained standard. So did most previous no-cost features, but Cadillac lengthened the list with standard curtain side airbags that covered all three seating rows and deployed by special sensors designed to detect an impending rollover. Power-adjust pedals were made standard too.

Wagons now came with heated first- and second-row seats, plus a power liftgate with a handy flip-open window. Unsurprisingly, the '07s also boasted several new options: front-seat cooling, power-retractable "runningboard" steps, a convenient one-latch "spring-up" feature for the second-row seats -- and to the delight of "hip-hoppers" everywhere, 22-inch wheels. Last but not least, the available navigation system added a rearview camera that used the dashboard screen to show what lay behind when backing up.

Cadillac's Art & Science design signature, previewed in the 2001 Escalade, took off with 2003 Cadillac CTS. Learn more about this daring style development -- and about the CTS -- on the next page.