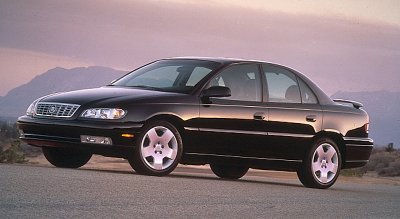 Cadillac discontinued the disappointing Catera after 2001. The 2001 Cadillac Catera Sport is pictured here.

From 2001 to 2003, Cadillac said goodbye to several models. Cadillac disposed of its rear-drive German-built Catera after 2001. Demand for midsize "near luxury" sedans was booming, but this one fizzled, likely because it was a Cadillac. "The Standard of the World" had been laid low indeed.

Eldorado then exited after 2002 and three years without significant change -- unless one counts renaming the base version ESC (Eldorado Sport Coupe) important. Sales that final year were only about a third of what they'd been a decade before -- fewer than 10,500 units. Among them were some 1600 Eldorado Collector Series (ECS) specials with the expected badges and specific trim, plus an exhaust system tuned to mimic the sound of the original 1953 Eldo. Yes, Caddy was still not above pushing "last" models, and you couldn't really blame them with the way things were going. With Eldorado's passing went another hallowed Cadillac name that's not likely to be revived, the division having decided that future models would have three-letter titles like ETC.

This 2002 Cadillac Eldorado was the last of a dying breed -- the hallowed model was retired after 2002.

The G-body Seville soldiered on through 2004. It remained a darn good car, just not as good as it needed to be for the super-competitive new-century market. Sales started sliding again after 1999, thudding to just over 28,000 units for '01 and ultimately crashing at just 6,514, this despite modest yearly price hikes and some interesting new features.

Notable among the latter was the 2003 debut of GM's Magnetic Ride Control shock absorbers for the sporty STS model's Road-Sensing Suspension. An innovation shared with that year's 50th Anniversary Chevrolet Corvette, these dampers were filled with a new "magnetorheological" fluid that could almost instantly change viscosity -- and thus ride firmness -- when acted on by an electric current. MRC was highly effective, but did nothing to change the less-than-electric image of the STS, let alone that of the less-sporting SLS model.

Seville sales dropped in the early 2000s. The 2002 Cadillac Seville is pictured here.

Next, learn how Cadillac's bona fide hit with the youth market, the Escalade, evolved through 2007.