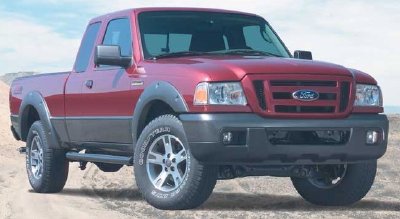 Since its introduction for 1991, Ford's Explorer had always been the number-one-selling SUV in the United States. To keep it on top, a revised version was introduced for 2006 featuring bolder styling, a redesigned interior, and an updated chassis. A more powerful V-8 was offered, too, mated to a new six-speed automatic transmission.

The Harley-Davidson edition Ford pickup truck returned to the F-150 line for 2006, taking the form of a SuperCab with two- or four-wheel drive and a 5.4-liter 300-horsepower V-8. Aside from that, other trucks received only minor changes that year, as Ford was concentrating its efforts on cars.

The Ford Ranger pickup truck was restyled for 2006 to align it with the corporate "Ford Truck look."

Explorer fended off new competition with a comprehensive 2006 makeover. Among the many changes were a re-engineered structure, revised suspension, reworked interior, bold front-end styling, and an available 292-horsepower V-8.

The brawny Ford F-650/F-750 cab/chassis was a solid foundation for all sorts of applications. The choice of regular cab, extended SuperCab, and four-door crew cab was a big plus in the commercial Class 6 and Class 7 truck markets.