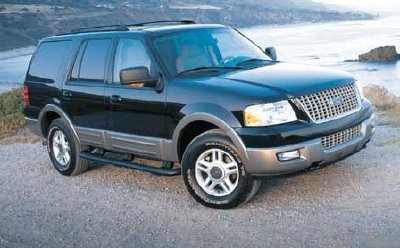 Two different styles of Ford F-150 pickup trucks were offered by Ford for the 2004 model year. The first was a selection of carry-over 2003 models in regular-cab and SuperCab form called F-150 Heritage. The other was a completely redesigned truck with new styling inside and out, as well as a new chassis.

Regular-cab versions of these Ford F-150 trucks gained narrow, rear-hinged "quarter doors" in back that were similar to the SuperCab's "half doors" and allowed easy access to the cargo area behind the front seats. Only the new version offered a SuperCrew body with four conventional doors. The Heritage disappeared after 2004, presumably kept in the lineup only until production could be ramped up on the new F-150 version.

The Harley-Davidson edition Ford truck returned for 2004, but instead of being based on the F-150, it appeared in the F-250 Super Duty line. It was offered in SuperCab or SuperCrew form, with four-wheel drive, a choice of 6.8-liter V-10 or 6.0-liter V-8 turbodiesel power, and a black-and-orange (Harley-Davidson's official colors) paint scheme. Also for 2004, the Windstar minivan was updated and renamed Freestar.

The Ford Expedition returned from its 2003 makeover with few changes.

Ford's 2004 F-150 pickup trucks were offered in five trim levels, each with specific styling details. Shown (from left) are the XLT, STX, Lariat, and FX4.

The new Ford F-150 truck interiors were redesigned with a modern, hi-tech look.

A selection from Ford's 2004 heavyweight offerings

Ford's heavyweight F-650 and F-750 series trucks offered an expanded 2004 lineup with a bewildering array of choices. There were now no fewer than eight basic models spanning three cab styles, 38 wheelbase/cab combinations, three engines, 14 power ratings, 19 transmissions, and eight seating packages. Uplevel models, like the one shown above, wore a chrome version of the imposing "nostril" grille that made the big-rig Fords hard to miss.

Ford goes green and crosses over in 2005. See the next page for photos and more info.