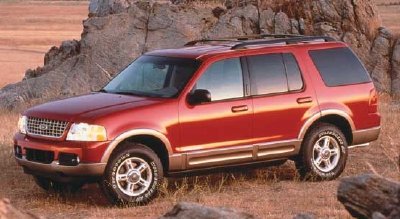 For 2002, the Ford Explorer SUV received a complete redesign, the first since its introduction 11 years earlier. New were a third-row seating option and standard independent rear suspension. Also that year, the popular Harley-Davidson F-150 pickup truck got a horsepower boost courtesy of a supercharger for its 5.4-liter V-8, and for the first time was available in grey as well as black.

A redesigned Explorer was introduced as an early 2002 model.

An even hotter F-150 Harley-Davidson SuperCrew arrived for 2002 and came in the traditional Harley black, but also in a new Dark Shadow Grey, pictured here. Other features included a bright "billet" grille, unique 20-inch chrome wheels, low-riding suspension, and a posh cab with leather upholstery and brushed-metal accents.

Ford celebrated its centennial in 2003. Find out how on the next page.