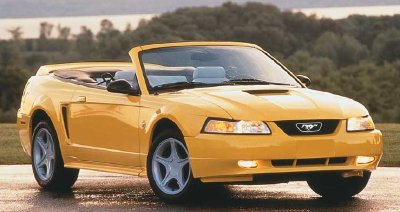 The turn of the century saw hard times for Ford, but the Mustang team plowed ahead with a '99 redesign to celebrate the original pony car's 35th anniversary.

The most obvious change to the 1999 Ford Mustang was a lower-body reskin exemplifying "New Edge Design." Instigated by Jack Telnack before his 1997 retirement, New Edge was both a follow-up and antidote to his aerodynamic "jellybean" styling, which had been so widely imitated that buyers had had enough.

Because it was basically a "geometric" approach, with crisp lines and deliberately jarring graphic elements set against rounded forms, New Edge did not translate easily to the Fox-4. AutoWeek likened the restyled coupe as "akin to putting a baseball cap on a shoebox." Still, Mustang designers under Ken Grant managed a fresh look that was also "retro" and fun.

The grille was a narrowed but deeper trapezoid whose running-horse mascot was again corralled in chrome on base and GT models. A large dummy scoop was set into a more visibly domed hood above wider wraparound headlamp clusters.

Body sides were pulled out, wheel openings newly flared. The signature C-shape side graphic and its simulated rear air scoop were enlarged, but the sheetmetal within was now flat rather than "pre-dented."

The rear end was modernized with larger, squared-up vertical taillamps and a trunklid made of light, plasticlike sheet molding compound. Bumpers bulked up as well. Coupes got a revised rear roofline with no quarter-window "kink."

All '99 Mustangs were considered 35th Anniversary models (dated from 1964, of course), but only base and GT versions wore this celebratory front-fender emblem.

Last but not least were front-fender emblems proclaiming Mustang's 35th birthday with a traditional "pony tricolor" circled in chrome. All '99 Mustangs got this emblem but about 5000 GT models got a special 35th Anniversary trim package. Priced at $2695, it included 17-inch five-spoke wheels, applied side scoops, another raised scoop and black striping for the hood, unique rocker moldings, rear spoiler, taillamp appliques, and a specific black-and-silver interior with leather upholstery, aluminum shift knob, and logo floormats.

As expected, mid-April brought more birthday bashes at Charlotte and in Southern California. And in a nice bit of timing, the U.S. Postal Service issued a special stamp late in the year to honor Mustang as one of 15 American icons of the 1960s. Pictured on the stamp was -- what else? -- a red '65 convertible.

Mustang engineers were concerned with improved handling and refinement for the '99 lineup. To learn how Paul Giltinan and his team accomplished that task, keep reading.