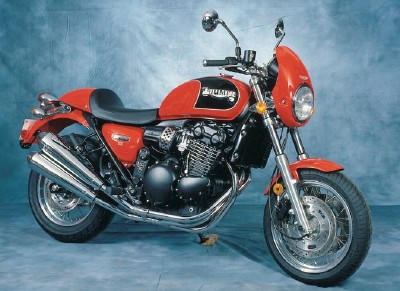 The British 1998 Triumph Thunderbird Sport motorcycle was a combination of retro-Triumph styling elements and modern mechanicals.

Among the array of models offered by the revived "New Triumph" company was the semi-sport Thunderbird. Wearing little more than a bikini fairing and streamlined tailpiece, it bridged the gap between the sleek Daytona sportbike and the "standard" Trident.

Bearing a name resurrected from Triumph models of the 1950s, the 1998 Triumph Thunderbird Sport carried many styling elements from the company's past life.

The shape, lettering, and striping of the fuel tank mimicked those from the 1970s, and the air cleaner and side covers also looked like those found on Triumphs of old.

On the mechanical side, however, it was a different story.

While a three-cylinder engine was also used in the Trident of the 1970s, the one powering the Thunderbird was larger (885 cc versus 750), water-cooled rather than air-cooled (though it still sported "fins"), and was of modern double-overhead-cam design rather than the old overhead-valve layout.

Spoked wheels held dual 12-inch disc brakes in front, a single 11-inch disc in the rear -- braking power the old Triumphs could only dream of.

Continue to the next page to see more 1998 Triumph Thunderbird Sport motorcycle pictures. 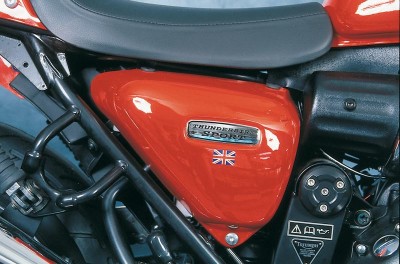 No mistaking this bike's nationality: Side covers wear a badge along with the British Union Jack.

The twin-cam, water-cooled triple had three exhaust pipes. They flowed into two mufflers, with the two outside pipes joining under the engine.
The Thunderbird Sport's spoked wheels held dual 12-inch disc brakes in front.
The fuel tank resembled classic Triumphs of old, both in shape and trim.