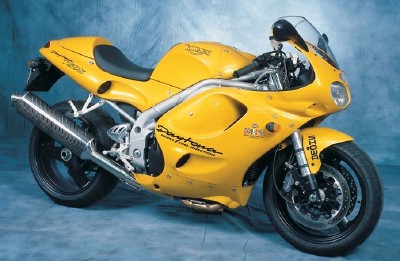 The 1998 Triumph T595 motorcycle was part of Triumph's resurgence in the 1990s, though this resurgence was admittedly in name only; the original Triumph motorcycle company was long gone, as was the fabled factory at Meridan.

Credited with the return was John Bloor, who had put up the money to fund a range of completely new motorcycles that was six years in the making.

These bikes were powered by water-cooled triples and fours displacing 750 to 1200 cc, and included standard, sport, touring, and eventually dual-purpose models.

The most sporting of the new Triumphs were the 750-cc three-cylinder and 1000-cc four-cylinder Daytonas. Wrapped in sleek bodywork, they were powerful enough, but taller and heavier than their Japanese rivals. That all changed in 1997.

With the introduction of the T595 that year, Triumph was back in the game. This revised Daytona sported a 955-cc fuel-injected triple in a new alloy frame, and the combination proved potent.

And though the Triumph name was perhaps more closely associated with "standard" models, the T595 quickly became the marque's best-seller.

Go to the next page to see more pictures of the 1998 Triumph T595 motorcycle. 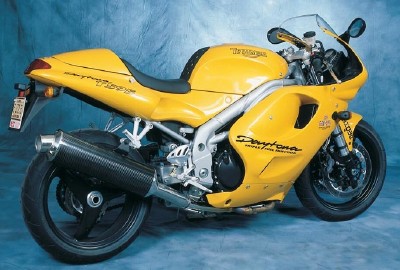 Tapered tail was typical of Triumph T595 styling.
Miminal seat size and padding and a small rear storage bin were standard sportbike practice.
The 1998 Triumph T595 speedometer went to 180 mph, the tach redlined at 10,500 rpm.
The only thing carried over from the Triumphs of old was the stylized logo -- and even that was changed some.