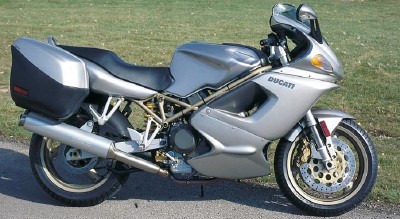 The 1998 Ducati ST2 motorcycle was aimed squarely at the sport-touring crowd, something of a departure for Ducati. Yet despite its more relaxed driving position and touring amenities, the ST2 boasted the kind of performance expected of the marque.

Along with an analog speedometer and tach, the ST2 included a digital display for fuel level, engine temperature, and time of day. Rearview mirrors were spring-loaded to help absorb shock, and the full-coverage fairing offered the driver an increased level of protection from the elements.

Integrated saddlebags swallowed a full-face helmet and were detachable with the turn of a key, while the sleek 5.5-gallon fuel tank allowed plenty of pleasurable miles between stops.

Though this was a two-valve version of the V-twin, a four-valve variant appeared shortly thereafter carrying the ST4 designation.

More pictures of the Ducati ST2 appear on the next page. 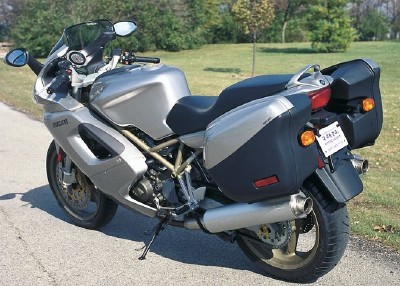 The comfortable design and large fuel tank made the ST2 a popular choice for long-distance touring.

The full-coverage fairing has integrated turn signals.
The ST2 includes a digital display for fuel level, engine temperature, and time of day.
The ST2's "handlebars" aren't so much bars as artful castings bolted to the tops of the fork tubes.
The sculpted fuel tank holds a full 5.5 gallons.