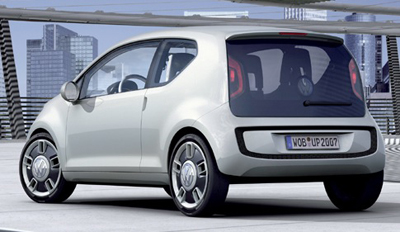 The 2007 Volkswagen up! concept car has a rear-mounted engine, like the original VW Beetle. It's intended as low-cost transport for four passengers
2007 Publications International, Ltd

With a rear-engine layout reminiscent of the original Volkswagen Beetle, the 2007 Volkswagen up! concept car could eventually recapture the first Bug's spirit.

Reborn for 1998, the Volkswagen New Beetle was a product of Volkswagen's simultaneous interest in the future, and in the company's own past. VW once again looked ahead and back with the 2007 Volkswagen up! concept car. It was introduced at the 2007 Frankfurt Auto Show with a name that indeed used an exclamation point and a lower-case "u."

The 2007 Volkswagen up! concept car is a four-passenger urban automobile with -- a la the original Volkswagen bug -- a rear-mounted engine. Volkswagen press releases stressed the up!'s functional and practical nature, intended to lure drivers who must negotiate challenging urban environments.

Just 136 inches long and 64 inches wide, the the 2007 Volkswagen up! concept car reflects VW's desire for a piece of emerging markets in India, China, and elsewhere -- regions with modest standards of living and narrow, crowded streets, where demand is great for durable, inexpensive people movers.

Press release language that noted "the beach" and "the university" suggests that Volkswagen sees the up! as not just a commuter car, but also one with appeal for relatively affluent young adults.

Volkswagen board member and director of technical development Ulrich Hackenberg drew explicit parallels with the Volkswagen up! and two other Volkswagen products, the Golf "world car" and the New Beetle. The company seemed eager to position the up! as another decisive statement that breaks new ground, technologically and strategically.

Initial press statements said nothing specific about the engine other than its rear placement. Volkswagen's language about the powerplant was simultaneously intriguing and opaque, promising only that "conceivable here are all aspects of technology that can be sensibly applied."

Rear-engine design opens up space in the Volkswagen up!'s forward cabin, placing the driver close to the windshield and allowing sufficient room for two back seat passengers. The back seats and the front passenger seat fold forward and are removable. The added cargo capacity augments twin-bin storage beneath the front hood, and a storage area at the rear.

The wheels of the 2007 Volkswagen up! concept car are pushed to the outer edges of the sculpted body, giving designers still more potential cabin space. Glass at the front and rear is wide and very tall, promising superior visibility. Side glass front-to-back is long, and kicks up sharply above the rear wheel arches for enhanced over-the-shoulder sightlines.

The car's front fascia is dominated by a horizontal, subtly up curved "happy face" panel that perpetuates the friendly, accessible face of the New Beetle.

Of course, Volkswagen is not the only automaker eying emerging markets. Frankfurt 2007 saw introductions of the tiny Suzuki Splash production car, and a clutch of urban-car concepts other than the Volkswagen up!, led by the Toyota iQ, Renault Kangoo, and Fiat Panda Aria.

Volkswagen hints that the up!, or something very much like it, will be the first of a New Small Family line. In the 2007 Volkswagen up! concept car, the spirit of the original bug, and the New Beetle, apparently lives on.