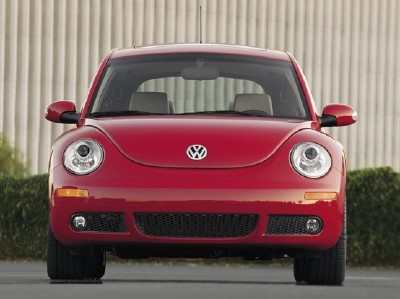 With sales flagging, changes to the 2006-2008 Volkswagen New Beetle were designed to revitalize a car that hadn't really changed significantly in looks or specification since its model-year 1998 introduction.

By 2006, the Volkswagen New Beetle was entering its ninth model year. Even with the addition of the convertible body style for 2003, demand was slipping. Volkswagen had high hopes a new powertrain and reworked, slightly more aggressive styling of the front fascia would reignite buyer interest.

The model line now consisted of 2.5 hatchbacks and convertibles and TDI hatchbacks. The 2006 Volkswagen New Beetle 2.5 models were named for their new engine, a slow-revving 150-horsepower 2.5-liter inline 5-cylinder. A heavy throttle foot was necessary for quick getaways; once underway, the engine felt capable.

Although Volkswagen's Golf (now bearing the resurrected "Rabbit" name) got a fresh platform for the 2006 model year, and shared it with the popular VW Jetta, the New Beetle continued to ride on the Golf platform that had been new for 1998.

Volkswagen said that stricter U.S. emission standards prompted it to bid adieu to its diesel engine, leaving the 2007 Volkswagen New Beetle with a single powerplant, the 2.5-liter, 150-horsepower inline 5-cylinder. Only two transmissions remained, a standard 5-speed manual and an optional 6-speed automatic.

The other development of note for the 2007 Volkswagen New Beetle was Volkswagen's exclusive new contract with Sirius satellite radio, which removed XM satellite from the Volkswagen broadcast mix. The 2007 New Beetle's base-price range was unchanged.

Volkswagen New Beetle sales continued to decline during calendar-year 2007, and VW did not apparently have much in the pipeline that would reignite near-term interest in the car. A redesign wasn't scheduled until the 2009 model year, and the 2008 New Beetle was basically a carryover of the 2007 model, though "Base" and "2.5" designations were dropped and replaced by "S" (base) and "SE" (uplevel) names.

How much life was left in the classic Beetle shape? Was it time for something completely new? Go to the next page to find out one unexpected avenue Volkswagen was exploring.

For more great articles and pictures on new and classic Volkswagens, see:­