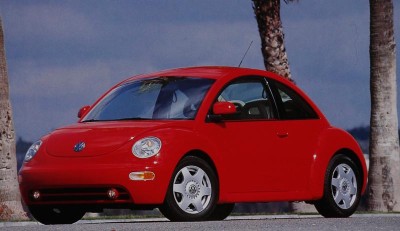 While the original Beetle was a study in basic transportation, the 1998 Volkswagen Beetle -- the New Beetle -- was flush with modern features.
2007 Publications International, Ltd

The 1998 Volkswagen Beetle deftly brought the retro styling themes of its exterior to its interior, with shapes -- and a bug vase -- that recalled the car's iconic past, but with features and appointments that were thoroughly modern.

The 1998 Volkswagen New Beetle's instrument was panel was a model of practical design. Gauges were limited to large round speedometer, a small tachometer, an­d a fuel indicator. Simple, good-sized rotary dials controlled the climate system.

Some drivers needed time to figure out the vaguely unorthodox radio controls. The clock was oddly located above the windshield, but a more problematic design lapse placed controls for power mirrors, door locks, and windows flat on the driver and passenger door panels, making for awkward twists of the wrist.

Front bucket seats were comfortable and supportive. Head and leg room in front were generous. In the three-place back seat, though, head room was nonexistent for riders taller than about 5-foot-5 because the stylishly sloped rear roofline cut sharply into back-cabin space.

The back seat was narrow, and pushed even slender teenagers shoulder-to-shoulder. Rear leg room was adequate if the front seats were pushed forward; tight if the seats were pushed back. Although both front seatbacks tilted far forward, entry and exit to the back remained awkward.

Visibility was adequate, though thick front roof pillars impeded forward view. Tight maneuvering could be a challenge because drivers could see neither the hood nor the trunk. Cockpit and trunk storage were modest, though the back seats could be folded flat forward for increased cargo capacity.

This dashboard from the nearly production-ready 1996 Concept 1 show car would show up virtually unchanged in the 1998 Volkswagen New Beetle.
2007 Publications International, Ltd

Build quality and materials were superior for the class. High-grade plastic dominated the cabin, and was complemented by aluminum steering wheel and handbrake pieces, and chromed door pulls. Exterior paint was smooth and glossy. Body panels lined up well, and the car was generally car free of squeaks, though loose rivets in door speakers on some 1998 and 1999 New Beetles caused rattles.

The 1998 Volkswagen New Beetle had a few other unexpected problems. Because the radio antenna cable was placed too close to the wiring harness on 1998 and 1999 New Beetles, AM radio reception went south when switches for lights and locks were operated.

The retro Beetle was an immediate head-turner, and initial demand for it was so great that many dealers charged -- and got -- well above sticker price. And that price, even with such options as leather seats, CD changer, anti-lock brakes, heated seats, power sunroof, and more still came in under $20,000.