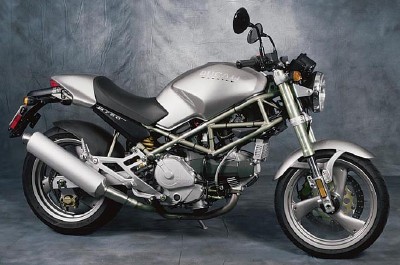 The 1997 Ducati 750 Monster was part of a trend in motorcycle design toward minimalism. See more motorcycle pictures.

The 1997 Ducati 750 Monster motorcycle drew lessons from the past to set a standard for the future.

While a swoopy, full-coverage fairing was a defining necessity for any self-respecting sportbike of the 1990s, a new breed of performance machine was beginning to bloom.

Stripped of all non-essentials, bikes like Ducati's Monster were starting a new trend toward minimalist motorcycles.

On the Monster, there's nothing to shroud the tubular trellis frame

The machine's simplistic nature meant even a tachometer was superfluous, but the approach resulted in a feather-light curb weight of just 390 pounds.

As a result, the Monster followed a formula that proved so successful with American muscle cars of the 1960s: light weight, powerful engine, basic amenities, low price. Introduced in 1993 with a 900-cc V-twin, smaller 750- and 600-cc Monsters followed, though the last wasn't sold in the United States until recently. 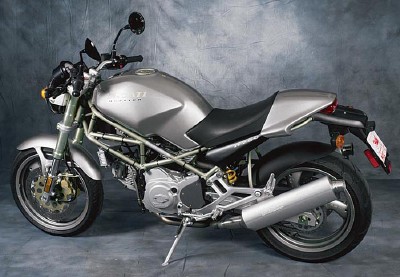 The back-to-basics Monster started life with an air-cooled, two-valve 900-cc V-twin, and was also eventually offered as this 750-cc version.

The 1997 Ducati 750 Monster motorcyle was the entry-level Ducati in the United States, though 900-cc V-twin models were also available.

No-nonsense philosophy deemed a tachometer unnecessary.
Monster engines were available in displacements of 600 cc, 750 cc, and 900 cc.
Big Brembo floating discs were used, though there was only one on the front wheel rather than the pair that appeared on most sporting Ducatis.