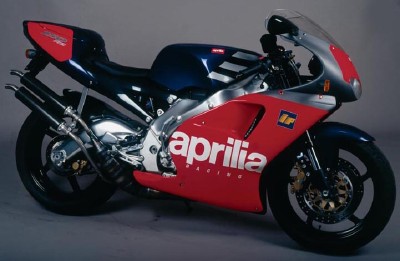 The 1996 Aprilia RS250, with its sportbike styling and superior performance, was the breakthrough bike for its young company. See more motorcycle pictures.

The 1996 Aprilia RS250 motorcycle put an upstart Italian bike manufacturer on the map with its racer look and raceworthy performance.

Aprilia arrived on the motorcycle scene only recently, but has already made a big splash in Europe.

Starting as a small bicycle manufacturer, the Italian company did not build its first motorcycles until the mid 1970s. The first examples were mopeds, quickly followed by small trail bikes. All used proprietary engines made by outside manufacturers.

Some of the company's racing bikes were powered by engines built in-house, but most of these carried proprietary units, too. One of the latter, fitted with a Rotax engine, proved fairly successful in the late Eighties, and capitalizing on its victories put Aprilia's 125- and 250-cc road bikes in the limelight.

Though scooters and mopeds contributed mightily to Aprilia's meteoric rise during the 1990s, its RS250 sportbike was what really made the company take off.

Powered by a highly tuned version of a Suzuki two-stroke V-twin, it was essentially a road racer for the street, and proved very popular.

Helped by the success of the RS250, Aprilia grew into one of Europe's largest motorcycle producers. One of its more notable efforts was the Pegaso 650. Combining a trail bike's suspension and large single-cylinder engine with sportbike styling, the Pegaso was a huge hit, prompting a whole new class of bikes in Europe. 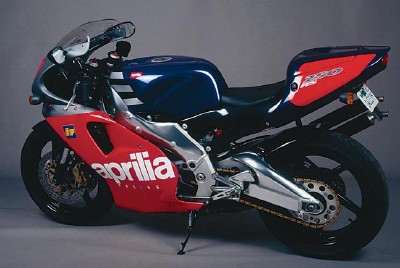 The 1996 Aprilia RS250 had sportbkike looks backed up with lots of reliable Suzuki power.

The 1996 Aprilia RS250, like most bikes from this relatively new Italian motorcycle maker, used an engine from another company. In the RS250's case, it was a tweaked version of a two-stroke V-twin from Suzuki.

Aprilia balanced form and function with sleek aerodynamic styling.
A fuel-tank decal on the RS250 noted Aprilia's 1994 World Championship motorcycle-racing title.
Odd-looking expansion chambers for the two-stroke V-twin culminated in carbon-fiber mufflers.
Many of the chassis components, like the swingarm, combined art with function.