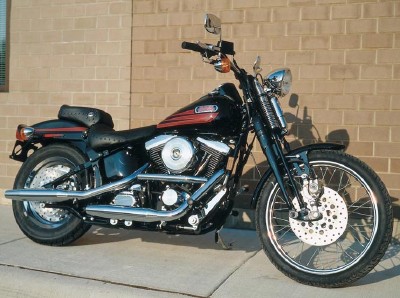 When is a bad boy good? When it's a 1995 Harley-Davidson FXSTSB Bad Boy custom motorcycle, that's when.

Introduced in 1995, the Bad Boy was based on the Harley-Davidson's Softail Springer model, but was cloaked in black from its narrow front fender to its bobbed tail.

Even such traditionally bright pieces as the fork tubes, instrument panel, and under-seat oil tank were blacked out. Only the front coil springs, headlight, exhaust pipes, handlebars, and various trim pieces carried chrome.

Though the look was retro, the technology was up to date. Springer front forks, similar in concept to those used on Harleys up through the 1940s, had arrived in 1988 carrying an updated design, and on the Bad Boy, also incorporated a multi-link arrangement that allowed the fender to hug the 21-inch tire more closely.

The frame that looked rigid wasn't; it was Harley's Softail design that incorporated a swingarm extending two shocks underneath the engine.

Power came from the company's 80-cubic-inch Evolution V-twin, and drilled disc brakes were featured front and back.

The slotted rear wheel was turned by a toothed belt instead of a chain, same as other Harleys of the period.

Despite its appeal, the Bad Boy led a short life. Production lasted only three years, during which time little changed besides the tank striping, which was available in yellow, blue, and red. 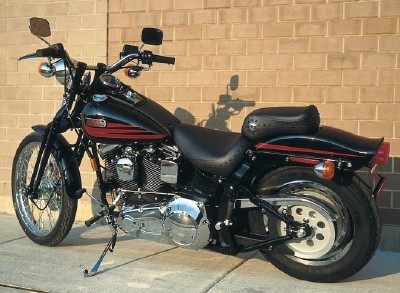 The 1995 Harley-Davidson FXSTSB Bad Boy motorcycle was based on Harley's Softail Springer model, but its theme was black paint, from its front fender to its bobbed tail.

The tank-mounted instrument panel and handlebar risers, usually finished in chrome, were black on the Bad Boy.
Special to this model was an enameled tank badge
The slotted cast rear wheel was driven
Chrome springs and shocks highlight