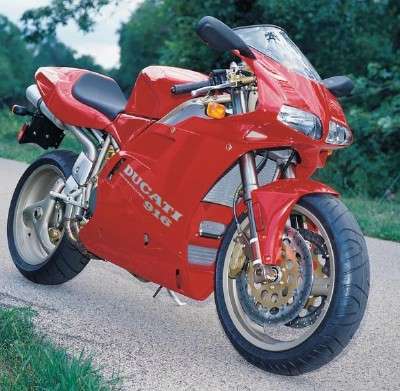 Lightweight, exotic, and water-cooled, the 1994 Ducati 916 was a serious challenge to other motorcycles. See more motorcycle pictures.

After chalking up numerous victories on racetracks around the world, the 1994 Ducati 916 motorcycle set out to make its mark on the street.

Though its engine spotted two cylinders and 100 cc's to most liter-class competitors, the 916 was a serious threat to Japanese rivals. Displacing 916 cc's and boasting an 11:1 compression ratio, Ducati's traditional V-twin with unique desmodromic valve actuation pumped 105 horsepower to the rear

While that hardly made the 916 the most powerful bike in its class, a combination of composite materials, compact design, and weight-saving engineering certainly made it one of the lightest; at 438 pounds, the 916 could best be described as svelte.

Since just 400 were planned to be exported to the United States, the 916 became an instant collectible. But those fortunate enough to snare one were also rewarded with a graceful and exotic expression of a state-of-the-art superbike -- Italian style.

Go to the next page to see more pictures of the 1994 Ducati 916 motorcycle. 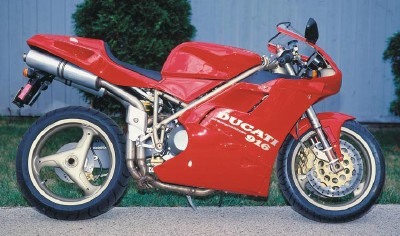 Low production and high performance made the 1994 Ducati 916 an instant collector's item.

The 916 broke with Ducati tradition in having its V-twin water cooled, but carried the company's unique desmodromic valvetrain along with four-valve heads and fuel injection.

The copper-colored cylinder behind the fork brace is a steering stabilizer.
The cylinder helps reduce the "twitchiness" that results from a short wheelbase and steep fork angle.
The 916 was not the most powerful bike in its class, but it was one of the lightest.
Exhaust is routed through mufflers mounted beneath the tail fairing.