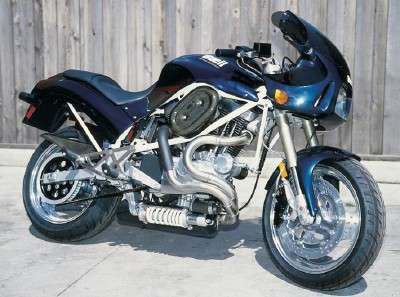 The 1994 Buell S2 Thunderbolt was powered by a modified version of the Harley-Davidson Sportster's 1203-cc V-twin.

By combining the latest hardware from Buell with the financial backing of Harley-Davidson, the 1994 Buell S2 Thunderbolt motorcycle was poised to make a full-scale attack on the popular sportbike market.

Eric Buell was certainly no amateur when it came to performance motorcycles, as he had been designing and building Harley-powered sportbikes since the late 1980s.

In the past, however, production had rarely exceeded 100 to 120 units per year; with Harley-Davidson newly entrenched as a 49-percent partner, annual sales were expected to number in the thousands.

Harley-Davidson tried marketing its own sports-oriented motorcycle back in 1977 with little success, but that bike, the XLCR, could hardly match the performance of lighter, more powerful Japanese entries. The S2, boasting Buell's latest technical refinements, promised to be a stronger contender.

Powering the S2 Thunderbolt was a modified 1203-cc V-twin from the Harley-Davidson Sportster, which rested on rubber mounts to reduce vibration to a more comfortable level. Each of the space-age frames was built by hand from chromoly tubing.

Out front was a huge 13-inch brake rotor gripped by a six-piston Brembo caliper, while in back, an aluminum swingarm activated an extension coil-over shock mounted beneath the engine.

Go to the next page for more pictures of the 1994 Buell S2 Thunderbolt motorcycle. 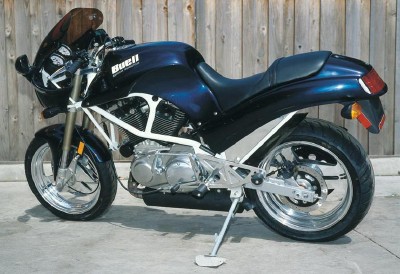 The S2 hues to Buell's taste for tech-trendy gauges.
Headlights and taillights are flanked by decorative grilles.
Many a rival saw only the S2 Thunderbolt's taillamp,