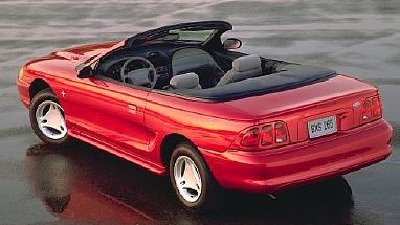 The 1997 Ford Mustang was arguably the most modern Mustang ever. But that  didn't have much effect on sales, which plunged 20 percent for '97

With its modern overhead-cam V-8 and up-to-date safety features, the 1997 Ford Mustang was arguably the most-modern Mustang ever. But that didn't have much effect on sales, which had been slipping through 1996. They plunged another 20 percent for '97 to 108,344, though Cobra volume stayed about the same.

Part of the showroom doldrums might be attributed to the slowing pace of changes that would compel new buyers to saddle up. Among the alterations for 1997, the passive anti-theft system was made standard for base models, and interiors were monotone instead of two-tone, though dashtops remained black. GTs were available with new "diamond-cut" 17-inch alloy wheels. And the base convertible's optional leather upholstery was gray instead of white.

The sales picture brightened for the 1998 Ford Mustang, jumping 62 percent to 175,522. Again, updates were modest.

Sales rebounded for the 1998 Ford Mustang, despite modest changes to the  lineup. Sales jumped 62 percent and included this GT ragtop.

Prices were still creeping up, now running from $15,970 for the V-6 coupe to $28,135 for the Cobra convertible. Incidentally, Cobra sales this year were exactly the same as for '97, because SVT was at its yearly limit of around 10,000 units.

Muscle, Memories, and Another Milestone

Mustang by now had been America's top-selling sporty car for 12 straight years and was outselling the Chevrolet Camaro and Pontiac Firebird combined. The achievement was remarkable, but not surprising.

Sales of the 1998 Ford Mustang SVT Cobra matched those of  '97 because SVT was turning them out at maximum annual capacity of about 10,000 units.

As Peter Bohr noted in a January 2000 Road & Track owner survey of 1994-98 models: "'Muscle and memories' is how some describe [the] seemingly eternal Mustang. It was…a favorite from the start. And because the folks at Ford have continued to hone the car over the years, the Mustang has earned a fiercely loyal following equaled by few other automobiles." More than ever, there was still nothing else quite like a Mustang.

But the future always beckons, and another milestone Mustang birthday lay ahead in 1999. Once again, the press and loyal Mustangers expected Ford to do something special for the occasion. They would not be disappointed.