The 1995 Ford Mustang and Mustang Cobra 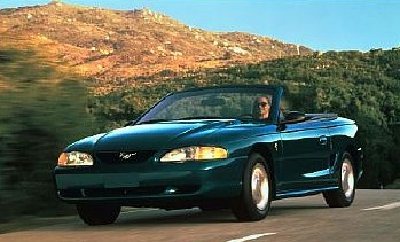 The 1995 Ford Mustang offered this base-model convertible starting at $20,795, not  bad for a sporty four-seat ragtop with a power-operated soft top as standard equipment.

Sales of the 1995 Ford Mustang and Mustang Cobra climbed to a combined 185,986 for the year, despite few changes to the cars. However many observers, including Consumer Guide®, were pleased to note tidier detail workmanship and a more solid overall driving feel.

A confusing footnote was an announced GTS model, a GT with base-level trim and a $1200 lighter sticker, which was yanked before '95 sales began. AutoWeek later reported the GTS would be a midyear addition priced $2000 below the GT, but it never showed up on factory price lists, nor did a rumored GTS package for '96.

But Ford had another way to low-frills high-performance. Remember SVO, Special Vehicle Operations? Well, by 1995 it was the Special Vehicle Organization with a new emphasis on developing over-the-counter speed parts.

Various kits allowed Mustangers to go as they paid. "If we had to choose just one," Motor Trend advised, "it would be the 3.55:1-ratio rear-end gearset. The stock GT comes with 2.73:1 gears for optimum fuel economy. The Cobra SVT uses a more performance-themed 3.08:1 set. But if you're willing to pay a fuel-economy penalty and $257…the 3.55:1 gears get the most out of the torquey 5.0-liter V-8 engine."

SVO also offered this in a $2995 "GT40" engine kit that upped horsepower to 290 -- 50 more than a stock Cobra, 75 more than a stock GT. Featured were big-valve "GT40" aluminum heads (vs. smaller-valve cast-iron units), a new intake manifold with tubular runners, a larger throttle body, tubular exhaust headers, and low-drag accessory drive. So equipped, Car and Driver's GT coupe ran 0-60 mph in 5.5 seconds and the quarter-mile in 14.2 at 100 mph.

For those who felt the 1995 Ford Mustang SVT Cobra was underpowred -- and  there were many who believed that -- the GT40 engine kit delivered  290 horsepower, 50 more than a base Cobra.

"That puts this garage-built Trojan horse in the speed ballpark with the Z28," said C/D, which noted that "you can pay any Ford dealer the 10-hour flat-rate charge (about $500) to do the installation honors." Still not enough? SVO also listed a factory-approved Powerdyne supercharger with a choice of 6- and 9-psi boost, starting at $2600.

Not to be outdone, SVT whipped up a new Cobra R, this time with a 351 V-8 based on its hot-rod F-150 Lightning pickup engine -- and completely street-legal. Higher compression (9.2:1), a wilder cam, and larger throttle body yielded 300 horsepower and a thumping 365 pound-feet.

Despite that, another stripped interior, and a fiberglass hood (domed for clearance), Car and Driver's prototype managed only 5.4 seconds 0-60 and a 14-second/99-mph standing-quarter, still only even with an everyday Z28. No matter. With only 250 copies, all coupes, this Cobra R was an instant sellout. Most were modified for road-course and drag racing.

The '95 Cobra R was the end of the road for Ford's overhead-valve small-block engine -- it did not return in the 1996 lineup. Keep reading to learn about more changes made to the '96 Mustang.