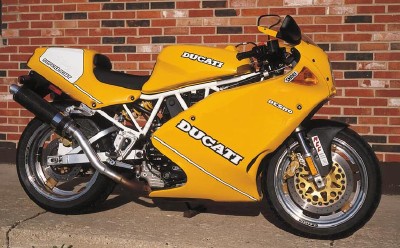 The 1993 Ducati Superlight lives up to its name, weighing in at less than 400 pounds. See more motorcycle pictures.

The 1993 Ducati Superlight is a rare sight on American roads, partly because their assembly process is largely done by hand, but also because only a total of 300 were imported to the United States.

As unique as the Superlight is, the components that are used in its construction are not all that exotic -- at least for Ducati. Based on the 900SS SP model, the Superlight is first dressed in a coat of Fly Yellow paint -- a radical departure from the traditional Ducati red. Complementing the sporting paint treatment is a solo seat, which dispels any notions of two-up riding.

In the hardware department, the Superlight has a stock 904-cc V-twin decked out in carbon-fiber regalia. Almost every non-structural cover on the engine has been replaced with a carbon fiber version. Even the upswept exhaust canisters are formed in carbon fiber to trim every ounce from the Superlight's fighting weight, which comes in at a feathery 390 pounds.

Keep reading for more pictures of the 1993 Ducati Superlight. 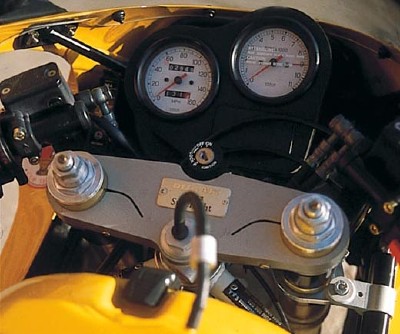 The tachometer redlines at 9000 rpm.

The 1993 Ducati Superlight uses a dry clutch as opposed to the wet clutch, allowing a drilled cover to be used in order to save weight.

The carbon-filter muffler reduces the weight of the Superlight.
The carbon-fiber front fender does its part to trim mass.
So rare is the Ducati Superlight that each example is numbered.
A racing-style fuel cap adds a competition touch.
The 904-cc Pantah V-twin uses a cogged belt to drive the camshafts.