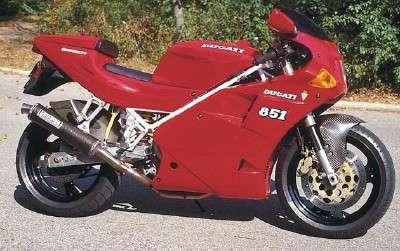 As the name implied, the 1992 Ducati 851 Desmoquattro motorcycle carried an 851-cc V-twin with Ducati's familiar desmodromic valvetrain, but now with the blessing of four valves per cylinder. In addition, the 851 was water-cooled and fed by electronic fuel injection. Power routed through a six-speed gearbox, and the combination helped racing versions rack up an enviable string of victories.

More importantly, perhaps, the 851 put Ducati back in the superbike game with a serious street contender, as previous versions were being overshadowed by high-tech Japanese hardware.

Though still down a bit on peak horsepower compared with some rivals, the 851 compensated with strong midrange punch, light weight afforded by exotic materials, and chassis dynamics second to none.

And the 851 was just a start. Its modern technology would form the basis for a string of even more potent street bikes, and is thus credited with ushering in a new era at Ducati.

On the next page are more pictures of the 1992 Ducati 851 Desmoquattro motorcycle. 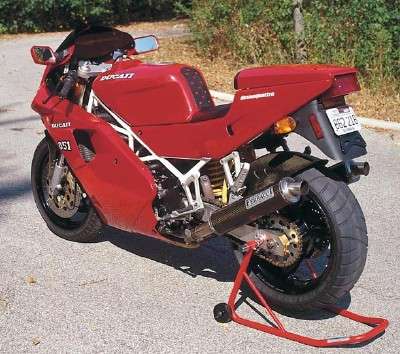 Carbon-fiber mufflers and fenders helped keep weight down on the 1992 Ducati 851.

The 1992 Ducati 851 Desmoquattro motorcycle was equipped with an 851-cc desmodromic four-valve V-twin but was still relatively light.