While Chevrolet would unveil a concept car called the Stingray III at the North American International Auto Show in January 1992, it was announced that the C4 generation would have to remain in production at least until 1997. Fortunately, it would continue with added power for the 1992 Corvette -- a boost of 50 bhp to be exact -- thanks to a new version of the standard pushrod small-block engine, dubbed LT1. 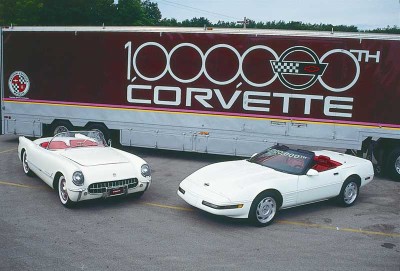 The one-millionth Corvette was produced on July 2, 1992.

Rated at a healthy 300 bhp at 5,000 rpm, and with 330 lb/ft of torque at 4,000 rpm, the LT1's newfound power came from a number of improvements and refinements to the workhorse 5.7-liter V-8. These included the introduction of computer-controlled engine timing, a new low-restriction exhaust system that used two catalytic converters and oxygen sensors (one for each cylinder bank), a new camshaft profile, a higher compression ratio, free-flow cylinder heads, and a revised multiport fuel-injection system. The LT1 weighed 21 pounds more than the L98 it replaced, however, primarily due to the use of cast-iron, rather than stainless-steel exhaust manifolds.

The LT1 was also the first Chevrolet powerplant to use "reverse flow cooling," in which the engine routed coolant directly to the cylinder heads, rather than sending it through the block first. This was said to allow higher bore temperatures and reduced ring friction, and also help cooling at key points. Mobil 1 synthetic oil was now used at the factory and was recommended for subsequent changes; the use of synthetic oil precluded the need for an engine-oil cooler, which was no longer offered as an option.

As could be expected, the motoring press greeted the new standard engine with gusto. Perhaps what Chevrolet did not expect was that most reviewers would also conclude that the LT1 and its 300 bhp tended to make the ZR-1 with its 75 extra horsepower -- not to mention its steep sticker price -- somewhat irrelevant. Car and Driver, for example, found that while the ZR-1 could hit 60 mph from a standing start in 4.7 seconds, the LT1 could reach it in just 5.1 seconds. While the magazine's top speed of 179 mph for the King of the Hill still reigned supreme, few rational motorists could argue that the 161 mph top-end the LT1 reached wasn't enough. On paper and in buyers' minds, the extra $31,683 tariff for the ZR-1's dwindling performance premium hardly seemed worth it, and only a scant 502 buyers ordered RPO ZR1.

All 1992 Corvettes benefited from a new standard traction-control system called Acceleration Slip Regulation, which was developed in conjunction with Germany's Bosch. It used the ABS sensors to detect rear-wheel slip and apply the brakes to the affected wheels and/or throttle back power to maintain traction. A dashboard switch could be activated to disable the system. Further helping the car hug the road to match the LT1 powerplant's added muscle were standard new directional/asymmetrical-tread Goodyear GS-C tires.

Otherwise, physical changes were nominal at best for '92. The car's twin exhaust outlets were now rectangular in shape, and the ZR-1 acquired additional identifying emblems on its side fenders.

The 1-millionth Corvette, a white convertible with specially stitched headrests, rolled off the Bowling Green assembly line on July 2, 1992. Ironically, Corvette production withered to just 20,479 for the '92 model year, its lowest output since 1962.

With a beefed-up new engine, the 1992 Corvette was more powerful. The newly standard Automatic Slip Regulation traction control also made it a delight to handle. Here are the specifications for the 1992 Corvette: