Though grip is prodigious and body roll next to nil, the Viper demands a smooth touch. Abrupt throttle lift-off causes marked torque reaction or "rubber-banding" in the driveline that can combine with the stiff suspension to completely upset balance and send the car skittering into oversteer. Mid-corner rear-end bump-steer is a problem too. No wonder the steering is so responsive; it has to be for recovery's sake, even with so much rubber on the road and near-perfect 50/50 weight distribution. Oversteer, of course, can be fun. But things can happen a lot faster in exotics than with everyday cars, so driving skill must be a match for the Viper's moves. 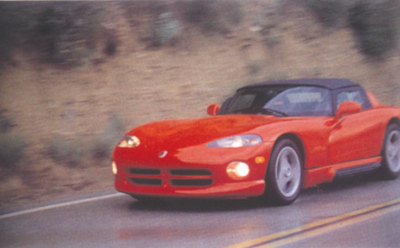 Vince Manocchi
Viper's rapid, rain or shine. But erecting its foul-weather gear can be tedious.

This racer-like demeanor doesn't translate into an overly harsh ride, though Viper is quite stiff through low-speed bumps. Its extremely rigid skeleton eliminates the structural flexing over pavement irregularities that afflicts so many convertibles. However, the huge hood shudders over bumps, the plastic panels behind the cabin squeak, and at speeds over 50 mph, wind buffeting is intense.

Rain causes its own comfort problems. Slotting in each side curtain is a snap, but the toupee-like top? First, spread the longitudinal outriggers to form a basic frame, then connect them with three cross-braces. Next, plug the prongs at the rear of that assembly into receptacles atop the "sportbar," and finally cinch down the front with two latches at the windshield header. The top seals well and doesn't restrict headroom, but it also traps all that engine heat. The cabin rapidly turns into a sauna. High humidity mists the inside of the windshield. The curtains, which can't be removed on the go, have zippered flaps for convenience, but they won't stay open for ventilation at anything above a crawl. Even then, they open only about halfway. 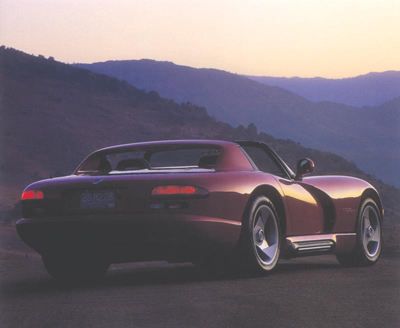 Still, it's all part of the back-to-basics Viper experience. "As soon as somebody says, 'Why not roll-up windows?' you know immediately this car is not for them," remarked Chrysler spokesman Thomas J. Kowaleski. "When we launched it in California, one of the people at the hotel was Regis Philbin -- you know, Regis and Kathy Lee? I introduced myself and said, 'We're out here launching this car, you ought to come down and see it.' So that night he comes down, and he takes one look at it and says 'Where's the door handles? You think anybody's gonna buy a car without door handles ?' And I say, 'Regis, this is not for you.' And his car comes out of the valet, and it was an old Cadillac Seville. Two days later, Nicolas Cage, the actor, drives into the hotel in a Corvette, and just literally on a dead run comes over to the Viper. He understood immediately."

"This," explained Dodge chief Levine, "is a no-excuses car for no-excuses people."