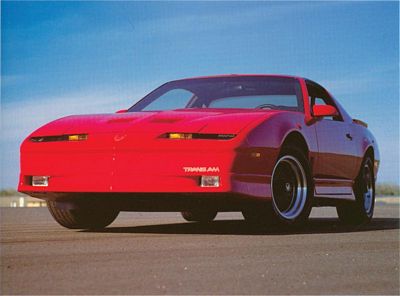 The 1990 Pontiac Firebird Trans Am ushered in a new decade with anticlimax. In what turned out to be a depressing year for sales, both safety and engines earned the greatest attention. At the upper extreme, the big 5.7-liter V-8, standard in the GTA, gained a boost to 235 horsepower. Pontiac claimed that a GTA, selling for $23,320, could accelerate to 60 mph in 6.5 seconds.

Every Firebird contained a standard driver-side air bag, which meant that steering-wheel radio controls could no longer be installed as an option. Cars with power windows added door map pockets with integral cupholders. Split folding rear seatbacks no longer were offered, but the one-piece fold-down seatback was retained.

Production in the 1990 model year dipped to just over 20,000 -- not even one-third of the 1989 total -- but Pontiac had a possible solution on tap. An ample facelift based on the aggressive aero snout of the Banshee concept car was ready for public sale well before the 1990 season was completed. Prospects for a turbocharged GTA were bandied about, but ultimately quashed. Still, the partial restyle would give Firebird one more stab at the marketplace before moving into a total redesign.