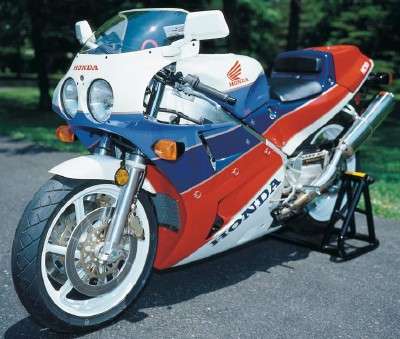 The RC30 looked like most any other sportbike, but it was basically a racing motorcycle. See more motorcycle pictures.

To the casual observer, the 1990 Honda RC30 motorcycle appeared to be just another player in the trendy crop of fiberglass-bodied sportbikes.

But to those in the know, it was nothing short of a thinly disguised racing machine. Released to the Japanese market in the late 1980s, American enthusiasts had to wait until 1990 to get their hands on an RC30.

Even then, a lofty price and limited availability made a 1990 Honda RC30 motorcycle a rare sight on public roads.

Though the 750-cc, double-overhead-cam V-4 produced "just" 86 horsepower--not a class-leading figure for 1990--it contained race-inspired components such as titanium connecting rods that reduced reciprocating weight.

Out front, the wheel and brake pads had quick-release mountings that smacked of racing influence. Likewise the rear wheel, which carried a brake disc to the inside, a chain sprocket to the outside of a single-sided swingarm, and attached with a single lug nut.

Yes, the RC30 may have looked like just another sports machine, but as we all know, looks can be deceiving. 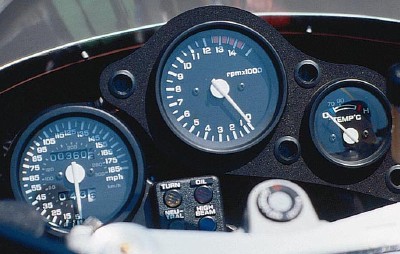 With race-inspired components and 86 horsepower, the 1990 Honda RC30 was a racing machine in the guise of a sportbike.

High price and limited availability made the RC30 a rare sight on public roads.
nearly eclipse the front wheel.
As on a real race bike, the seat was designed for one.
Locking covers in the tail section hid a storage area.