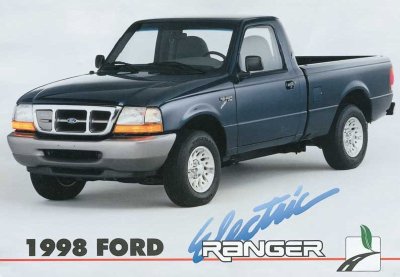 Ford Motor Company reached a milestone in 1998 when it celebrated the 50th anniversary of the F-Series brand. And at the smaller end of the truck scale, Ranger received a longer cab and larger standard engine, along with an electric-powered model. The year also brought Lincoln dealers an upscale version of the Expedition called Navigator.

Ford introduced the Ranger EV (Electric Vehicle) for 1998. Powered by a rear-mounted 90-horsepower electric motor, the EV claimed a top speed of 75 mph and a range of from 35 to 50 miles from conventional lead-acid batteries mounted between the frame rails. Anti-lock brakes, dual airbags, and an electric heater were standard; air conditioning was optional. Shared with standard 1998 Ford Rangers was a regular cab that was three inches longer than before, allowing for more legroom.

The Ford Ranger EV's instrument panel included a "Distance to Empty" gauge indicating how far the truck could be driven based on the amount of charge left in the batteries. The "E" on the gear indicator stood for "Economy Drive." When selected, it increased the amount of electrical regeneration when braking.

Not available in EV form was the Ford Ranger with extended SuperCab, which for 1998 offered dual rear-hinged back doors, a feature not available on any other contemporary compact pickup. Also for 1998, the Ranger's base engine grew from 2.3 liters to 2.5.

The NASCAR F-150 marked the Golden Anniversaries of both the stock-car racing association and Ford's F-Series pickups. The dual side exhausts shown on this prototype were moved to the rear on production versions.

Ford didn't let the 50th Anniversary of the F-Series pass unnoticed, with numerous promotions depicting the inaugural 1948 version beside a new 1998 model.

Lightning returned and Ford positioned itself for the new century in 1999. Continue to the next page to find out how.