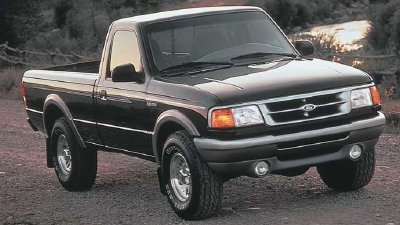 For 1996, Mercury dealers got their own version of the Ford Explorer to sell. Called the Mountaineer, it came with unique trim and a standard V-8. The 1996 Ford truck model year would also bring totally redesigned Class 7 and 8 Louisville Line models, closely followed by new Class 8 Ford AeroMax trucks.

Ford spent a lot of time, money, and effort developing these vehicles to make them the class of their class, giving them sleek styling intended to take them into the 21st century. This all proved perplexing a short time later when Ford announced it was seeking to sell off these truck lines -- the eventual buyer being archrival Freightliner.

Although the sale shocked many observers, it was a move by Ford to free up manufacturing space for its popular light-duty vehicles, such as the Explorer and F-Series pickup trucks.

Ranger pickup trucks added an optional passenger-side airbag for 1996. Included was a switch that allowed the bag to be deactivated if a child seat was placed in the front seat.

The 1996 model year would prove the last for the Bronco, as it came to the end of its rope after a 30-year run. Sales of two-door SUVs in general were on the wane, as customers increasingly preferred the convenience of four doors.

Ford F-Series pickup trucks continued with few changes for 1996, although dropped from the line were a couple of versions that would overlap with the early arriving (and redesigned) 1997 models, along with the high-performance F-150 Lightning.

The Louisville Line of Ford trucks was redesigned for 1996, getting a sloped windshield and rounded front contours, the latter made more prominent on this version thanks to its set-back front axle.

Featuring a laid-back windshield and rounded edges that presented a slippery face to the wind, the AeroMax 9500 was introduced for 1996 as Ford's top truck.

The Ford F-Series trucks received a redesign in 1997 -- their first since 1980. See the results on the next page.