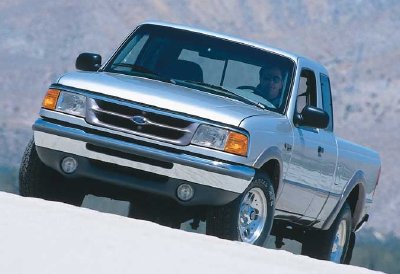 Ford added a more modern minivan to its line for 1995. Called the Windstar, this front-wheel-drive people-mover was initially intended to replace the aging Aerostar, but the latter's continued popularity made it the Windstar's running mate until finally being retired after 1997.

Although the Ford Explorer was still the number-one seller in its market segment, Ford elected to freshen its appearance for the 1995 model year. Also newly available that year was a flexible-fuel version (FFV) that could run on a mixture of gasoline and ethanol, the latter a fuel made from corn.

The Ford Ranger pickup truck received a host of changes for 1995, including an available driver-side airbag and four-wheel anti-lock brakes. Also, the grille was revised and the base 2.3-liter four-cylinder engine gained 14 horsepower, now 112.

The Ford Explorer received its first styling change since being introduced as a 1991 model. A new grille (in either chrome or body color, depending on trim level) highlighted a rounded front end, and a revised interior included dual front airbags. Both two-door and four-door versions continued to be offered, but the latter remained far more popular.

F-250 Heavy Duty and F-350 models were available with a revised direct-injection turbodiesel engine for 1995.

This new engine (shown here) produced 210 horsepower and a whopping 425 pound-feet of torque -- both up significantly over previous versions. The turbodiesel was also offered in heavy-duty versions of the Econoline/Club Wagon.

Heavier-duty Ford trucks were redesigned for 1996 -- and sold to another company soon after. Find out why on the next page.