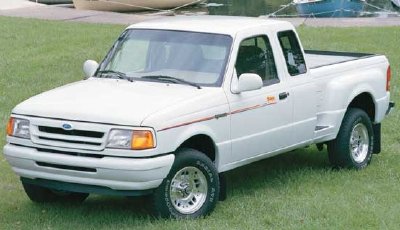 Ford highlighted safety for 1994, as the Econoline van gained four-wheel anti-lock brakes and the Ford F-Series pickup trucks got a driver-side airbag.

Midway through the 1993 model year -- in which it was redesigned -- Ranger added a sporty Splash model to its lineup that included a Flareside bed and special trim. At first offered only as a regular cab, an extended-cab version (shown here) was added for 1994. Ford-owned Mazda now sold its own version of the Ranger as the B-Series, but it didn't offer a Flareside bed.

Light-duty F-Series pickups got a driver-side airbag for 1994, but there were few other changes of note.

Ford introduced a new turbodiesel truck engine and a redesigned Explorer in 1995. Continue to the next page to learn more.